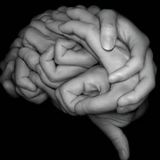 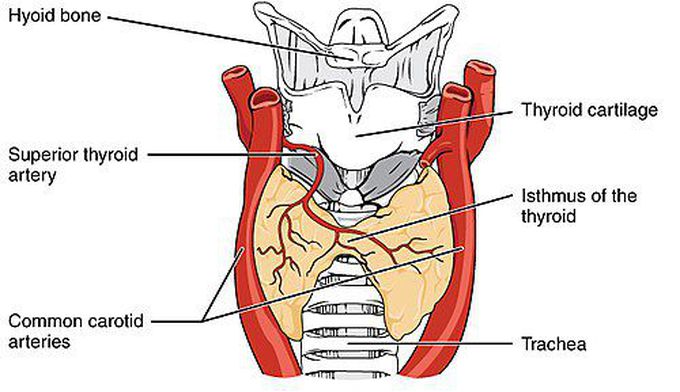 The thyroid gland, or simply the thyroid, is an endocrine gland in the neck, consisting of two lobes connected by an isthmus. It is found at the front of the neck, below the Adam's apple. The thyroid gland secretes thyroid hormones, which primarily influence the metabolic rate and protein synthesis. The hormones also have many other effects including those on development. The thyroid hormones triiodothyronine (T3) and thyroxine (T4) are created from iodine and tyrosine. The thyroid also produces the hormone calcitonin, which plays a role in calcium homeostasis.Hormonal output from the thyroid is regulated by thyroid-stimulating hormone (TSH) secreted from the anterior pituitary gland, which itself is regulated by thyrotropin-releasing hormone (TRH) produced by the hypothalamus.The thyroid may be affected by several diseases. Hyperthyroidism occurs when the gland produces excessive amounts of thyroid hormones, the most common cause being Graves' disease — an autoimmune disorder. In contrast, hypothyroidism is a state of insufficient thyroid hormone production. Worldwide, the most common cause is iodine deficiency. Thyroid hormones are important for development, and hypothyroidism secondary to iodine deficiency remains the leading cause of preventable intellectual disability. In iodine-sufficient regions, the most common cause of hypothyroidism is Hashimoto's thyroiditis—also an autoimmune disease. In addition, the thyroid gland may also develop several types of nodules and cancer.