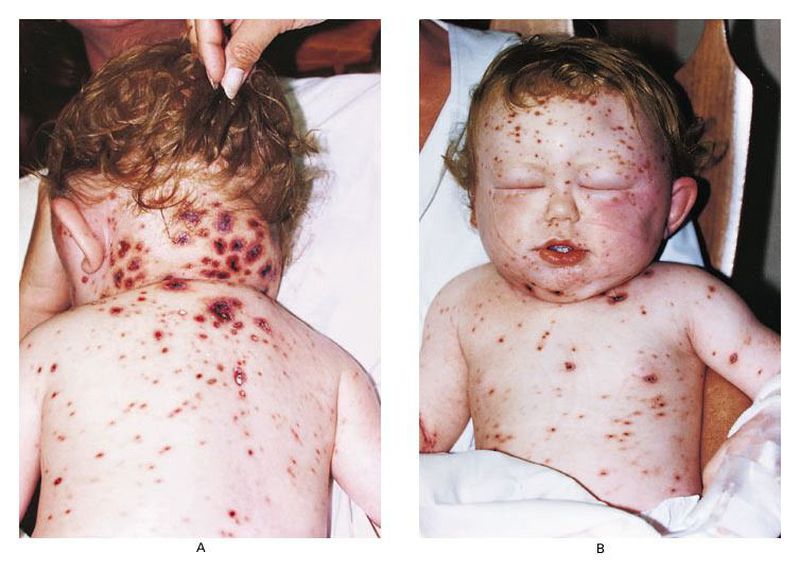 Four days after the onset of symptoms of varicella in a 16-month-old girl, violaceous lesions developed on her neck and trunk that became necrotic and had an erythematous base. The lesions gradually became larger, measuring up to 2 cm in diameter (Panel A). On admission, the child had a temperature of 38.8°C and a white-cell count of 15,000 per cubic millimeter. She appeared lethargic and acutely ill. She was treated initially with ampicillin and sulbactam. Two days later, swelling of the face, periorbital area, and neck developed (Panel B). Culture of a specimen obtained from the base of a necrotic lesion yielded gram-positive cocci, which were confirmed to be Staphylococcus aureus. Blood cultures were also positive for this organism. Because the organism was reported to be resistant to oxacillin, treatment was switched to vancomycin on the third hospital day. The fever disappeared 72 hours later, and the edema and necrotic lesions gradually resolved. The child was discharged on the seventh day of vancomycin treatment. Javier Tello, M.D. Juan Bossano, M.D. Lake Charles Memorial Hospital, Lake Charles, LA 70601 Source: nejm.org