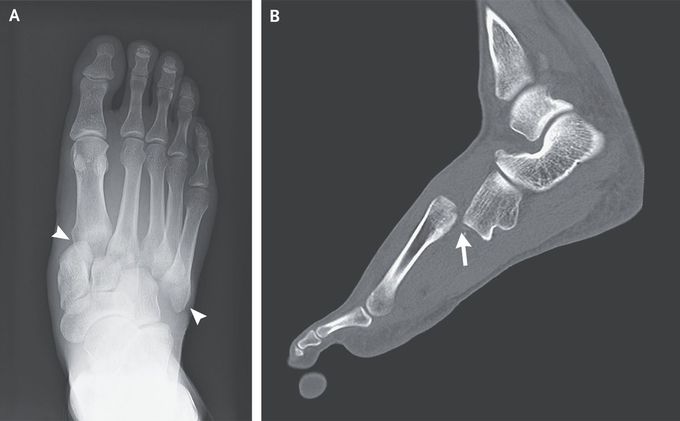 A 34-year-old man presented to the emergency department with sudden onset of pain in his right foot after landing a jump during a handball game. On physical examination, there was swelling and bruising on the dorsum of the right foot, and the patient was unable to bear weight on the foot. Non–weight-bearing radiographs showed lateral displacement of the first through fifth metatarsal bones from the cuneiform bones and the cuboid (Panel A, arrowheads). Computed tomography of the right foot revealed lateral and dorsal dislocation of the first through fifth metatarsal bones from the cuneiforms and cuboid (Panel B, arrow), as well as fractures of the first and second proximal metatarsals. The patient received a diagnosis of Lisfranc injury — an injury to the tarsometatarsal joint complex that can range in severity from soft-tissue damage to fractures with displacement. Lisfranc injuries are rare and may be misdiagnosed owing to subtle findings on radiography or to the presence of other, distracting injuries. The presence of substantial foot pain after even minor trauma should arouse suspicion for this condition. The patient underwent immediate surgical repair without complications. At follow-up 10 weeks after surgery, he could fully bear weight on the foot, and at follow-up 6 months later, his gait was normal. Hiroyuki Funatomi, M.D. Akira Kuriyama, M.D., M.P.H., Ph.D. Kurashiki Central Hospital, Okayama, Japan