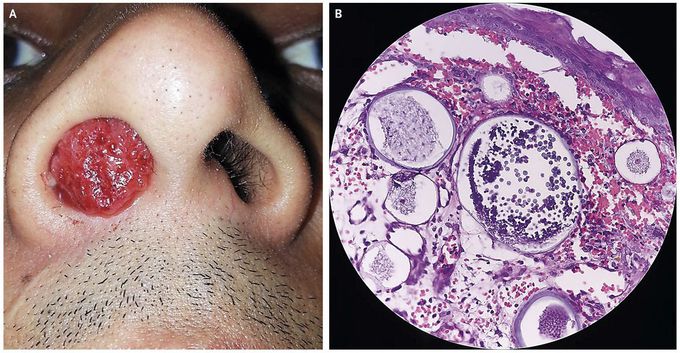 A 27-year-old man presented to the otorhinolaryngology outpatient clinic with a 3-month history of progressive obstruction and bleeding from the right naris. Physical examination showed a red, granular, pedunculated, nonpulsatile mass that obstructed the right nasal cavity and bled on touch (Panel A). The patient reported bathing frequently in the local pond. The mass was excised, and the base of the lesion was cauterized. Histopathological examination revealed multiple thick-walled sporangia in various stages of maturation, surrounded by dense inflammation (Panel B, hematoxylin and eosin). A diagnosis of rhinosporidiosis was made. Rhinosporidiosis is a chronic granulomatous disease caused by the aquatic protistan parasite Rhinosporidium seeberi. The typical presentation is a reddish, friable mucosal polyp, commonly involving the nasal cavity, that bleeds profusely on touch. The oropharynx, conjunctiva, rectum, and external genitalia may also be affected. The disease is endemic in India and Sri Lanka, although the infection also occurs in other parts of the world, including Africa and South America. At follow-up 8 months later, the patient had areas of recurrence in the nasopharynx that were removed. Chirom A. Singh, M.S. Pirabu Sakthivel, M.S., D.N.B., E.N.T., M.Ch. All India Institute of Medical Sciences, New Delhi, India

CaseObstructionOtorhinolaryngologyRhinosporidiosis
438
Other commentsSign in to post comments. Don't have an account? Sign up now!
Related posts
Recurrent hypoglycemia caused by a solitary fibrous tumourTrichobezoarsTrichobezoarsRapid Transformation from Hydatidiform Mole to Invasive MoleWhy in macrosomia the fetal brain and kidneys dont enlarge?Plunging ranulaVolvulusGREEN COLOURED URINE!!!!Anatomy and Physiology of Larynx - Structure and Function of Larynx - ENT Complete LecturesDog bite