A 52-year-old woman presented to the emergency department with a 24-hour history of severe retrobulbar pain and blurred vision in the left eye. She described the pain as constant with a shooting character, lasting a few seconds. Examination of her left eye revealed a mid-dilated pupil that was unresponsive to light, redness of the conjunctiva, and hardening of the left orbit on palpation. The visual acuity was 20/125 in the left eye. An increased intraocular pressure of 55 mm Hg (normal range, 10 to 21) confirmed the diagnosis of acute angle-closure glaucoma, an ophthalmologic emergency that is characterized by a rapid increase in intraocular pressure due to impaired outflow of aqueous humor. Symptoms can be precipitated by dim light and certain medications, including anticholinergic and sympathomimetic drugs. The patient reported no history of taking these medications nor was any other cause identified. She was treated with intravenous acetazolamide, a topical carbonic anhydrase inhibitor, and an α2-adrenergic agonist and underwent laser iridotomy, after which her symptoms rapidly resolved. When she was discharged 4 hours later, the intraocular pressure was 10 mm Hg. Subsequently, the patient was lost to long-term follow-up. 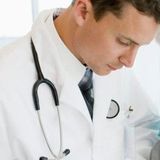 Rad
over 3 years ago

1Reply
Other commentsSign in to post comments. Don't have an account? Sign up now!
Related posts
Krukenberg tumorTrichorrhexis invaginataMonilethrixDiabetic cheiroarthropathyTriangles of neckCross Section of PenisOvercoming Chronic Anxiety With Buy Farmarpram 2mg Online Anxiety disorders are one of the most prominent forms of mental disorders in adults today. They are characterized by an overwhelming feeling of anxiety, which leads to a sense of being constantly on edge and often causes feelings of sadness, dread, and panic. Now with the help of Buy Farmarpram 2mg Online all you need is a nearby pharmacy to get your hands on this highly effective drug.Dx pleaseNeuroleptic malignant syndromeValium 10 mg Usage and Street Value All Provided on Careskit