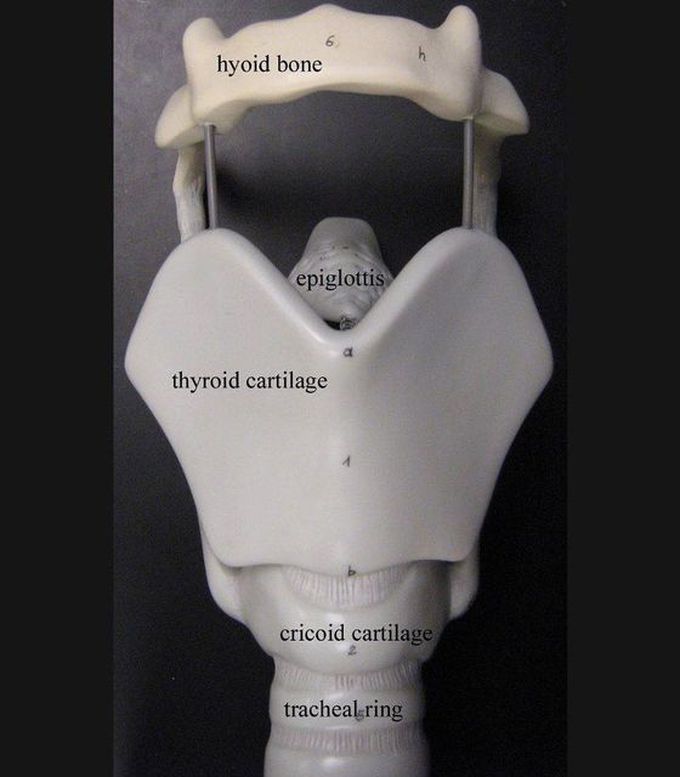 Cartilages of the Larynx

The larynx is a cartilaginous skeleton, some ligaments, and muscles that move and stabilize it and a mucous membrane. The larynx, commonly called the voice box, is an organ in the top of the neck involved in breathing, producing sound and protecting the trachea against food aspiration. The opening of larynx into pharynx known as the laryngeal inlet is about 4–5 centimeters in diameter. The larynx houses the vocal cords, and manipulates pitch and volume, which is essential for phonation. It is situated just below where the tract of the pharynx splits into the trachea and the esophagus. In adult humans, the larynx is found in the anterior neck at the level of the cervical vertebrae C3–C6. It connects the inferior part of the pharynx (hypopharynx) with the trachea. The laryngeal skeleton consists of nine cartilages: three single (epiglottic, thyroid and cricoid) and three paired (arytenoid, corniculate, and cuneiform). The hyoid bone is not part of the larynx. The larynx extends vertically from the tip of the epiglottis to the inferior border of the cricoid cartilage. Its interior can be divided in supraglottis, glottis and subglottis.