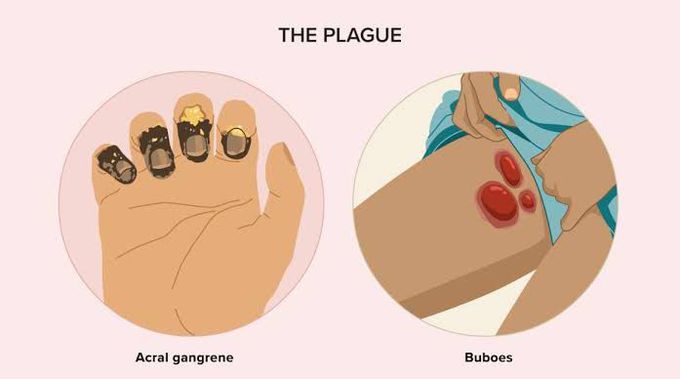 Plague is a disease that affects humans and other mammals. It is caused by the bacterium, Yersinia pestis. Humans usually get plague after being bitten by a rodent flea that is carrying the plague bacterium or by handling an animal infected with plague. Plague is divided into three main types — bubonic, septicemic and pneumonic — depending on which part of your body is involved. Signs and symptoms vary depending on the type of plague. Bubonic plague Bubonic plague is the most common variety of the disease. It's named after the swollen lymph nodes (buboes) that typically develop in the first week after you become infected. Buboes may be: Situated in the groin, armpit or neck About the size of a chicken egg Tender and firm to the touch Other bubonic plague signs and symptoms may include: Sudden onset of fever and chills Headache Fatigue or malaise Muscle aches Septicemic plague Septicemic plague occurs when plague bacteria multiply in your bloodstream. Signs and symptoms include: Fever and chills Extreme weakness Abdominal pain, diarrhea and vomiting Bleeding from your mouth, nose or rectum, or under your skin Shock Blackening and death of tissue (gangrene) in your extremities, most commonly your fingers, toes and nose Pneumonic plague Pneumonic plague affects the lungs. It's the least common variety of plague but the most dangerous, because it can be spread from person to person via cough droplets. Signs and symptoms can begin within a few hours after infection, and may include: Cough, with bloody mucus (sputum) Difficulty breathing Nausea and vomiting High fever Headache Weakness Chest pain Pneumonic plague progresses rapidly and may cause respiratory failure and shock within two days of infection. Pneumonic plague needs to be treated with antibiotics within a day after signs and symptoms first appear, or the infection is likely to be fatal.