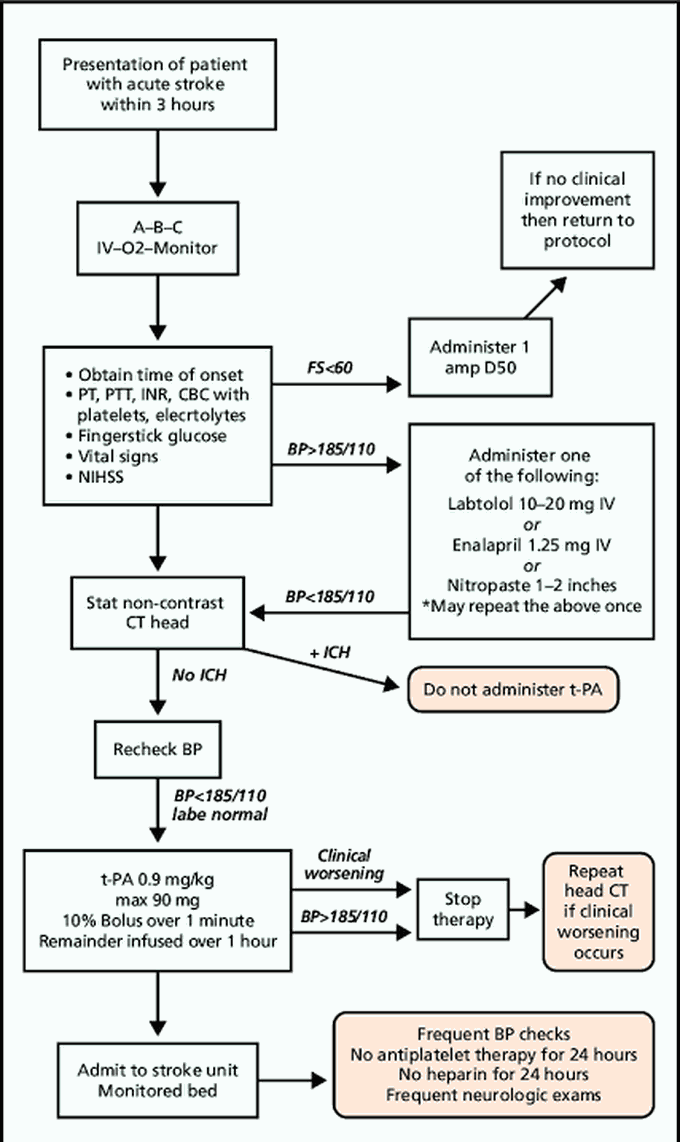 Proper medical evaluation and prompt treatment are vital to recovering from a stroke. According to the American Heart Association and American Stroke Association, “Time lost is brain lost.” Call 911 or local emergency services as soon as you realize you may be having a stroke, or if you suspect someone else is having a stroke. Treatment for stroke depends on the type of stroke: Ischemic stroke and TIA Since a blood clot or blockage in the brain causes these stroke types, they’re largely treated with similar techniques. They can include: Clot-breaking drugs Thrombolytic drugs can break up blood clots in your brain’s arteries, which will stop the stroke and reduce damage to the brain. One such drug, tissue plasminogen activator (tPA), or Alteplase IV r-tPA, is considered the gold standardTrusted Source in ischemic stroke treatment. This drug works by dissolving blood clots quickly. People who receive a tPA injection are more likely to recover from a stroke and less likely to have any lasting disability as a result of the stroke. Mechanical thrombectomy During this procedure, a doctor inserts a catheter into a large blood vessel inside your head. They then use a device to pull the clot out of the vessel. This surgery is most successful if it’s performed 6 to 24 hoursTrusted Source after the stroke begins. Stents If a doctor finds where artery walls have weakened, they may perform a procedure to inflate the narrowed artery and support the walls of the artery with a stent. Surgery In the rare instances that other treatments don’t work, surgery can remove a blood clot and plaques from your arteries. This surgery may be done with a catheter. If the clot is especially large, a surgeon may open an artery to remove the blockage. Hemorrhagic stroke Strokes caused by bleeds or leaks in the brain require different treatment strategies. Treatments for hemorrhagic stroke include: Medications Unlike with an ischemic stroke, if you’re having a hemorrhagic stroke, the treatment goal is to make your blood clot. Therefore, you may be given medication to counteract any blood thinners you take. You may also be prescribed drugs that can: reduce blood pressure lower the pressure in your brain prevent seizures prevent blood vessel constriction Coiling During this procedure, your doctor guides a long tube to the area of hemorrhage or weakened blood vessel. They then install a coil-like device in the area where the artery wall is weak. This blocks blood flow to the area, reducing bleeding. Clamping During imaging tests, your doctor may discover an aneurysm that hasn’t started bleeding yet or has stopped. To prevent additional bleeding, a surgeon may place a tiny clamp at the base of the aneurysm. This cuts off blood supply and prevents a possible broken blood vessel or new bleeding. Surgery If your doctor sees that an aneurysm has burst, they may do surgery to clip the aneurysm and prevent additional bleeding. Likewise, a craniotomy may be needed to relieve the pressure on the brain after a large stroke. In addition to emergency treatment, your healthcare team will advise you on ways to prevent future strokes.