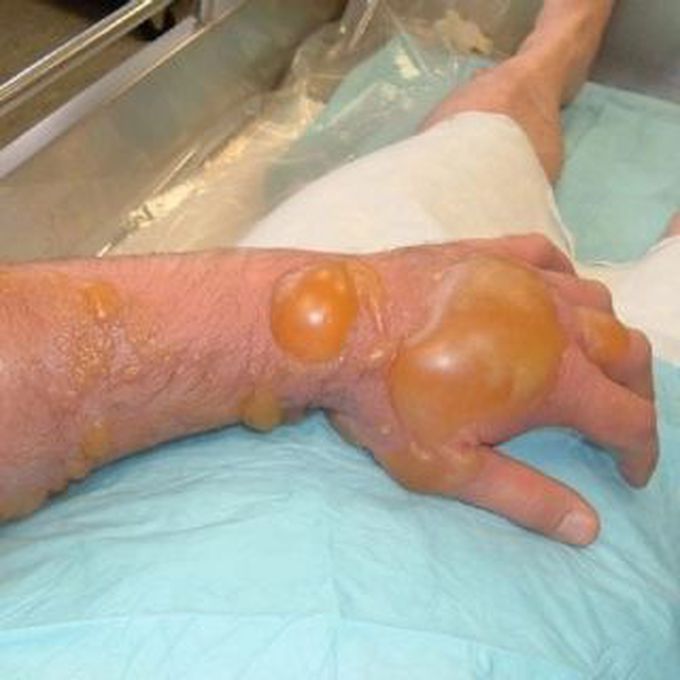 From chemical weapon to chemotherapy. A brief history of chemotherapy's origin. Mustard gas was used in the first world war to decimate armies. Cheap and easy to make, it caused devastating injuries, including massive blisters, lung, and long term organ injury, and bone marrow damage (found at autopsy). Fortunately the use of chemical gas was outlawed in warfare, but studies on its effects continued in secret. In the 1940s, researchers at Yale found the gas caused white blood counts to dramatically drop and wondered if it could be used to treat cancer. In 1942, the first patient was injected with nitrogen mustard, a derivitave of mustard gas. His tumor shrunk dramatically at first, but then returned and the patient died from bleeding ulcers shortly thereafter. The results still prompted an explosion of new research into other cytotoxic drugs. Prior to this discovery, no other drugs capable of shrinking tumors so quickly existed. Thus, chemotherapy was born. Nitrogen mustard is actually still used today to treat certain types of lymphoma, but another mustard gas derivative called Cyclophosphamide (or Cytoxan) is more frequently used today as a chemotherapy drug. It is given in combination with other drugs and is one of the most common agents used to treat breast cancer, ovarian cancer, leukemia, and a handful of other cancers worldwide. Pictured: Mustard gas burns on an ordnance disposal officer who was accidentally exposed to mustard gas found in an old artillery shell that was dumped in the ocean. He survived the 2004 incident and helped the miliray develop tests for mustard gas exposure. Unfortunately, he still suffers from long term effects. Photo credit: New York Times