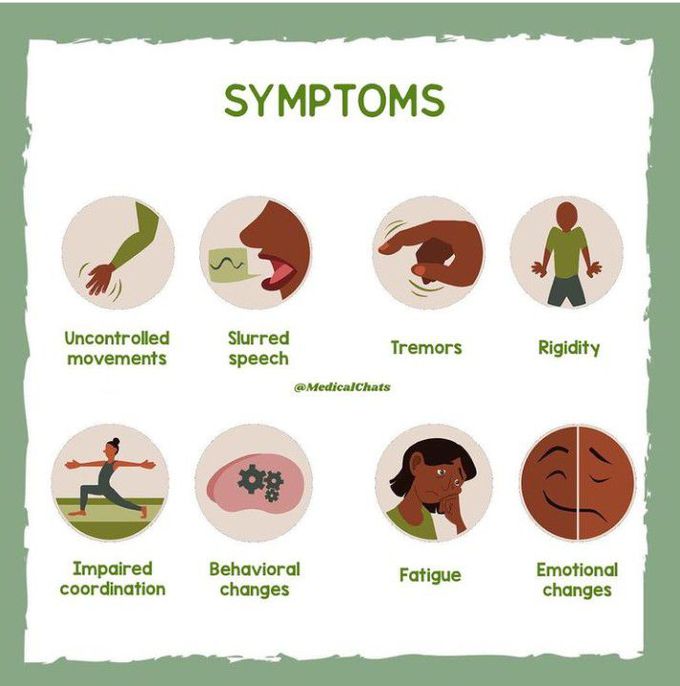 Symptoms of the Huntington's disease

Huntington's disease (HD), also known as Huntington's chorea, is a neurodegenerative disease that is mostly inherited. The earliest symptoms are often subtle problems with mood or mental abilities. A general lack of coordination and an unsteady gait often follow. It is also a basal ganglia disease causing a hyperkinetic movement disorder known as chorea. As the disease advances, uncoordinated, involuntary body movements of chorea become more apparent. Physical abilities gradually worsen until coordinated movement becomes difficult and the person is unable to talk. Mental abilities generally decline into dementia. The specific symptoms vary somewhat between people. Symptoms usually begin between 30 and 50 years of age but can start at any age. The disease may develop earlier in each successive generation. HD is typically inherited from an affected parent, who carries a mutation in the huntingtin gene (HTT). However, up to 10% of cases are due to a new mutation. The huntingtin gene provides the genetic information for huntingtin protein (Htt). Expansion of CAG repeats of cytosine-adenine-guanine (known as a trinucleotide repeat expansion) in the gene coding for the huntingtin protein results in an abnormal mutant protein (mHtt), which gradually damages brain cells through a number of possible mechanisms. Diagnosis is by genetic testing, which can be carried out at any time, regardless of whether or not symptoms are present. No cure for HD is known, and full-time care is required in the later stages. Treatments can relieve some symptoms, and in some, improve quality of life. The best evidence for treatment of the movement problems is with tetrabenazine. By: https://www.instagram.com/p/CZxEVXWs2aY/?igshid=YmMyMTA2M2Y=