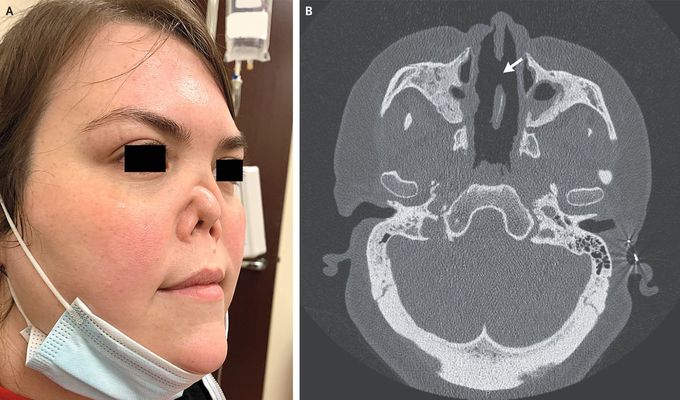 A 34-year-old woman with chronic rhinosinusitis and nasal polyposis presented to the facial plastic surgery clinic with rhinorrhea, bloody nasal crusting, and nasal deformity that had progressed over a period of 7 years. She had no history of intranasal cocaine use. Physical examination revealed a near-total loss of the nasal bones and septal cartilage, which had resulted in complete collapse of the nasal bridge and retraction of the nasal tip (Panel A). Computed tomography of the sinuses showed severe, near-complete opacification of the paranasal sinuses and a large nasal septal perforation (Panel B, arrow). An enzyme-linked immunosorbent assay showed that circulating antibodies to proteinase 3 (PR3) were present at a level of 2432 units (≥20 units indicates positivity). A diagnosis of granulomatosis with polyangiitis was made. Granulomatosis with polyangiitis is an autoimmune disorder characterized by extravascular necrotizing granulomatous inflammation and necrotizing vasculitis with a propensity to affect the upper and lower respiratory tract and the kidneys. Clinical features may include recurrent rhinosinusitis and bloody nasal crusting that can progress to septal perforation and destruction of the sinonasal cavities. Treatment with rituximab, low-dose cyclophosphamide, and prednisone was initiated. At a follow-up visit 6 months later, the patient’s bloody nasal discharge and crusting had resolved. The nasal deformity is unchanged. The patient continues to receive maintenance therapy with rituximab. Reza Zonozi, M.D. John L. Niles, M.D. Massachusetts General Hospital, Boston, MA