Striae and an Adrenal Mass

A 27-year-old primigravid woman was admitted to the hospital with new-onset diabetes and hypertension at 32 weeks of gestation. She reported that she had had worsening proximal muscle weakness, striae, and facial plethora for several months. Physical examination showed violaceous striae over the abdomen (Panel A), breasts, and dorsal and supraclavicular fat pads. Laboratory studies were notable for a potassium level of 2.9 mmol per liter (reference range, 3.5 to 5.5) and a urine protein:creatinine ratio of 24 (with protein measured in milligrams and creatinine in millimoles) (reference value, <30). An abdominal ultrasound examination, performed as part of the evaluation for Cushing’s syndrome, revealed a right adrenal mass that was 7 cm in length in its largest dimension. The level of free cortisol in the urine over 24 hours was 3058 nmol (reference value, <160). The patient’s hypertension was managed with labetalol and nifedipine; however, HELLP syndrome (characterized by hemolysis, elevated liver enzymes, and low platelet count) developed at 34 weeks of gestation. A healthy infant weighing 2890 g was delivered. A computed tomographic scan obtained without contrast material showed an adrenal mass measuring 6.8 cm in its largest dimension (Panel B, arrow) with a density of 22 Hounsfield units, a finding suggestive of adrenal carcinoma. Adrenalectomy was performed 1 month after delivery, and histopathological analysis confirmed the presence of high-grade adrenocortical carcinoma. An evaluation showed no evidence of metastatic disease, and treatment with adjuvant mitotane was initiated. Jennifer H. Yo, M.B., B.S. Shital Gandhi, M.D. Mount Sinai Hospital, Toronto, ON, Canada 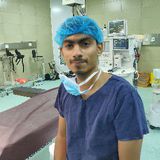