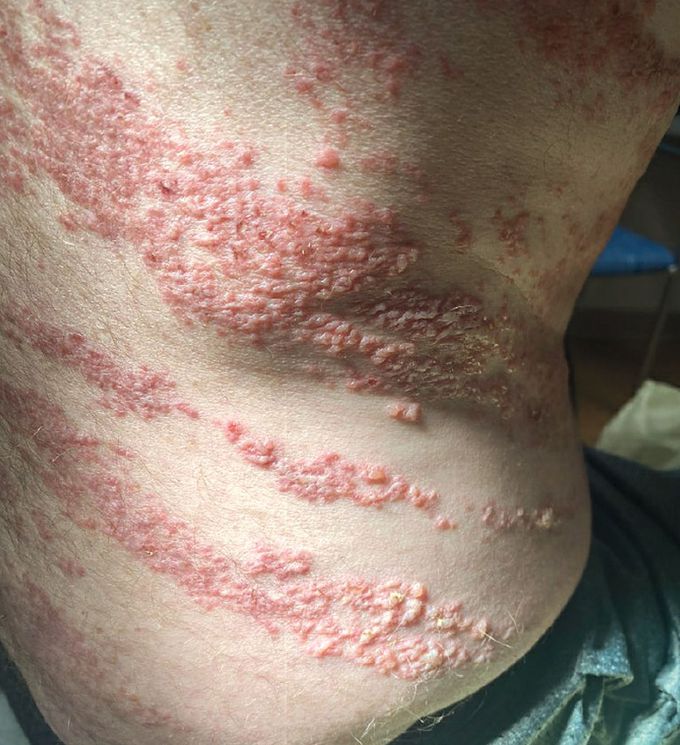 A 69-year-old man presented to the dermatology clinic with a 1-week history of an itchy, burning rash on his back and right trunk. The rash appeared 2 days after he had been discharged from the hospital after prostatectomy for prostate cancer, and he reported that a similar rash had developed after he had a surgical procedure 20 years ago. He also reported having received the live varicella–zoster vaccine several years before the current presentation. Skin examination was notable for the presence of confluent, friable vesicles on an erythematous base distributed along the lines of Blaschko, without crossing the midline. A Tzanck smear showed no viral cytopathic changes, and the results of a polymerase-chain-reaction assay for varicella–zoster virus were negative. A biopsy specimen showed intraepidermal vesicles with acantholytic dyskeratosis, a finding consistent with Darier’s disease, an autosomal dominant disorder of keratinization often characterized by greasy papules on the head, chest, and body folds. The patient received a diagnosis of linear Darier’s disease, a noninherited variant that may be mistaken for shingles. A topical glucocorticoid was prescribed, and at follow-up 6 weeks later, the rash had resolved. Timothy D. McKinley, M.D. Michele Maroon, M.D. Geisinger Medical Center, Danville, PA source: nejm.org