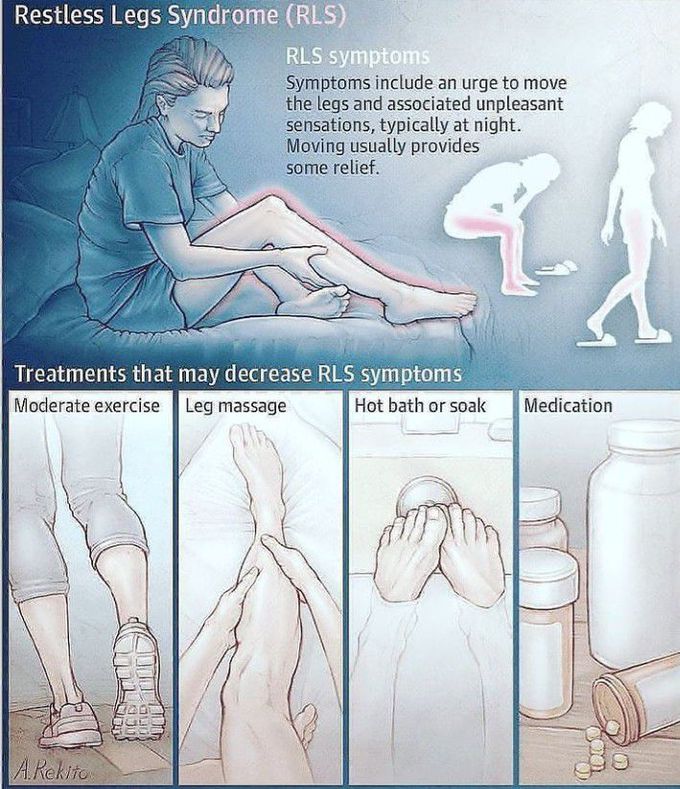 Restless legs syndrome (RLS) is a condition that causes an overpowering urge to move your legs,usually because of an uncomfortable sensation.It’s also called Willis-Ekbom disease.It typically happens in the evening or nighttime hours when you're sitting or lying down.That is why it is often considered as a sleep disorder.Moving the legs ease the unpleasant feeling temporarily. SYMPTOMS: RLS can begin at any age and generally worsens as you age.People with restless legs syndrome have unusual sensation in their legs (like itching, crawling, pulling, aching, throbbing, or pins and needles) and a powerful urge to move their legs to make the restlessness go away. The condition can also happen in other areas like the arms, chest, or head.It may be bilateral or unilateral. It's common for symptoms to fluctuate in severity. Sometimes, symptoms disappear for periods of time, then come back. CAUSES: The accurate cause of RLS is still unknown but it is thought to be caused by an imbalance of the brain chemical dopamine, which sends messages to control muscle movement.Genetic roots have also been dicovered. It might also be tied to: Chronic diseases. Certain chronic diseases like iron deficiency, Parkinson’s disease, diabetes, and peripheral neuropathy seem to cause RLS. Medications. Some drugs might make symptoms worse, including anti-nausea meds, antipsychotics, and some antidepressants. Pregnancy. Some women have RLS during pregnancy, especially in the last trimester. Symptoms usually go away within a month after delivery. Lifestyle. A lack of sleep or apnea can trigger symptoms or make them worse. Also alcohol, tobacco, and caffeine use can worsen RLS. TREATMENT: There’s no proper cure for restless legs syndrome itself, but treatments can help control it so you can get a good night’s sleep. If the RLS is mild or moderate, some small changes in lifestyle might help like getting regular exercise; following a sleep schedule; and avoiding caffeine, alcohol, and tobacco specially before sleep. Other ways to treat RLS without drugs include: Leg massages Hot baths Heating pads or ice packs on your legs A vibrating pad called Relaxis Credits: https://www.instagram.com/p/CMX_LntBdyC/?igshid=13lmh5iezzlg6 https://www.webmd.com/brain/restless-legs-syndrome/restless-legs-syndrome-rls

0Reply
Other commentsSign in to post comments. Don't have an account? Sign up now!
Related posts
Dentistry in Space!Muscles of Hip Joint -Anterior ViewFertilizationHiccups-CausesStrokeMeiosis Vs MitosisBacillus Anthrax on Blood AgarA Case Study of Cleft PalatePunch in GlassDiverticula