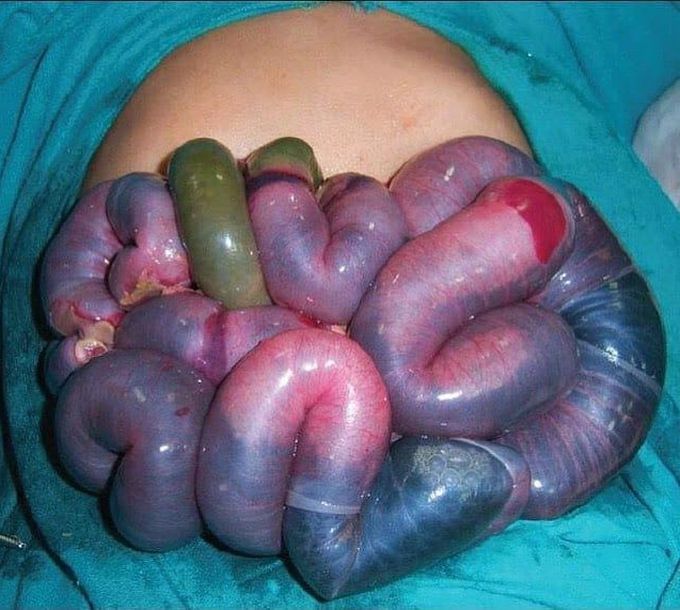 Bowel infarction or gangrenous bowel represents an irreversible injury to the intestine resulting from insufficient blood flow. It is considered a medical emergency because it can quickly result in life-threatening infection and death. Any cause of bowel ishemia, earlier reversible form of injury, may ultimately lead to infarction if uncorrected. An infarcted or dead intestinal segment is a serious medical problem because of the fact that intestines contain non-sterile contents within the lumen. Although the fecal content and high bacterial loads of the intestine are normally safely contained, progressive ischemia causes tissue breakdown and inevitably leads to bacteria spreading to the bloodstream. Untreated bowel infarction quickly leads to life-threatening infection and sepsis and may be fatal. The only treatment for bowel infarction is immediate surgical repair and eventually removal of dead segment. Credit: Anup Mohta, Indian Journal of Microbiology and Pathology 0Reply
B
Brendan
over 2 years ago Farhan Khan
over 2 years ago Alieu Sisawoa
over 2 years ago

What was the outcome for the patient

resection of the segment of intestine ..... and supplementing with dietary drugs ...due to malabsorption Omar Ham
over 2 years ago

0Reply
J
Jen
over 2 years ago

That whole bowel is gone... how will they even live

not the whole bowel.... a segment ...even a segment removal causes major problems like malabsorption

Symptoms include : ab. tenderness , blood in stools , forcefull bowel movements , sudden ab. pain. Treated : by 1.using antibiotics 2.removing the blockage (ischemia) 3.resection of the segment infeceted. AND IN CASE OF RESECTION OF A SEGMENT MAY LEAD TO MALABSORBTION..SO THE PATIENTS MUST TAKE DIETARY SUPPLEMENTS 😊

0Reply
J
Jen
over 2 years ago

Exactly! How would they survive?

0Reply
1…2
12
Related posts
EczemaViral sinusitis‌
ECG mind mapingDrrezahasanzadCardiacRemoval of an Iris implant!Drreza hsnzdSensitive teethHello there! I am a producer for a major TV network. We are launching a new medical series about tumors, growths and cysts. I would love to connect with anyone who is struggling who cannot afford treatment as our production will cover treatment for most, if not all conditions of this nature. Please email help@aberrantcreative.com