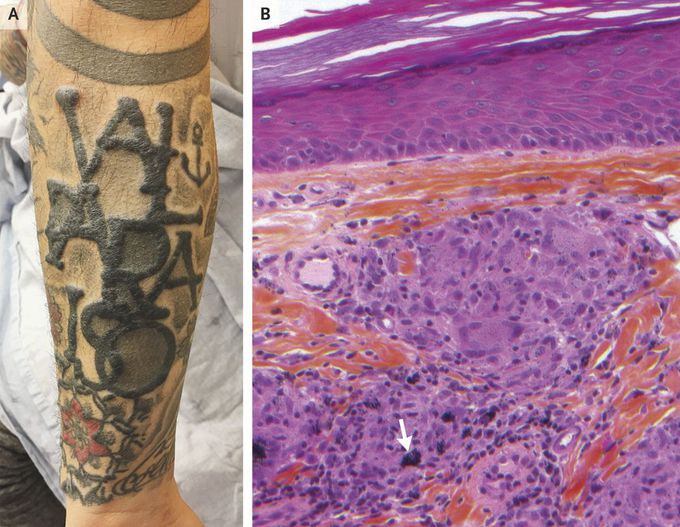 Sarcoidal Reaction in a Tattoo

A 42-year-old man presented to the dermatology clinic with a 5-month history of numerous papules along the pattern of his tattoos, which he had received 10 years earlier (Panel A). There was no associated pain or pruritus. He reported that he had not had any dyspnea, fever, arthralgias, visual symptoms, or other systemic symptoms, and the remainder of his physical examination was normal. A biopsy of the papules showed noncaseating granulomas with black and brown pigment within the superficial and deep dermis (Panel B, arrow), which supported the diagnosis of a cutaneous sarcoidal reaction. Tissue cultures for bacteria, mycobacteria, and fungi were negative. Thoracic computed tomography revealed bilateral hilar and mediastinal lymphadenopathy with no parenchymal abnormalities. Further investigation for systemic sarcoidosis, including ophthalmic, pulmonary function, and cardiac testing, was negative. Granulomatous reactions to tattoo ink or scars may occur years after the provoking event. The patient’s skin lesions resolved after several months of treatment with a potent topical glucocorticoid.

I have a tattoo that has done same. Other than being itchy when it's hot outside or I'm clearly diaphoretic from exercise, I have no other complaints, other than that it looks not so great 🙃

1Reply
Other commentsSign in to post comments. Don't have an account? Sign up now!
Related posts
How do I take advantage of this app to improve my knowledge? Some tips please6Ps of DyspneaWhat is adeferent between cardiac arrest and heart attack?Serum ElectrophoresisTreatment of canon's diseaseTreatment of bell's palsyLung HerniaDyspneaCauses of DyspneaSymptoms of Dyspnea