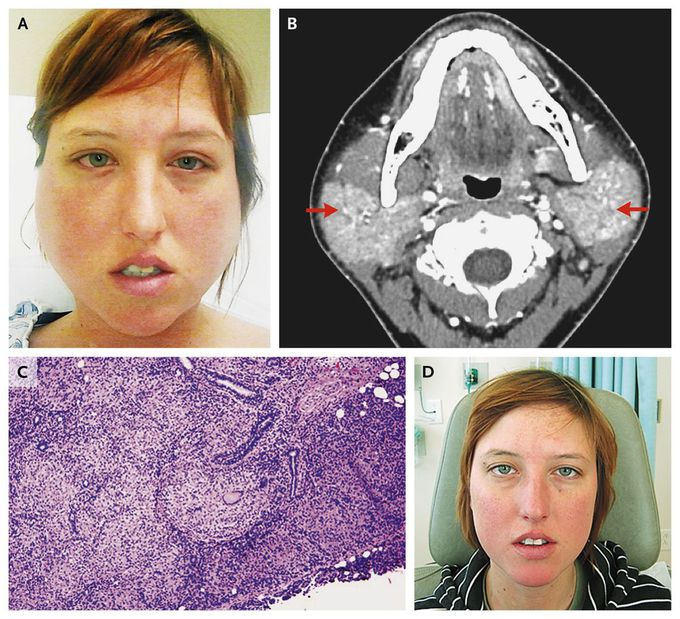 A 32-year-old woman presented with a 6-week history of swelling of both parotid glands, dry eyes, and dry mouth. She reported having difficulty moving the right side of her face, and she felt tingling in the right side of her tongue. Physical examination revealed enlargement of both parotid glands, which were firm and nontender, submandibular enlargement, and enlargement of lacrimal glands (Panel A). She did not have a fever, and there was no uveitis. She could not completely close her right eye, was unable to purse her lips, and was unable to smile on the right side of her face. Facial sensation was symmetric and intact. The results of a test for Lyme disease and the human immunodeficiency virus were negative. Serum IgG4 levels were normal. A chest radiograph suggested bilateral hilar adenopathy and possible right paratracheal adenopathy but was otherwise unremarkable. Computed tomography of the head revealed enlargement and increased uniform contrast enhancement of the both parotid glands (Panel B). A biopsy specimen from the right parotid gland revealed scattered granulomas with focal central necrosis. Stains for acid-fast bacilli and fungi were negative (Panel C, hematoxylin and eosin). She was given a diagnosis of Heerfordt's syndrome, a rare form of sarcoidosis in which the compression of the facial nerve results in palsy. She was started on 60 mg of prednisone daily, and at follow-up 19 days later, the swelling and facial nerve palsy had resolved (Panel D). 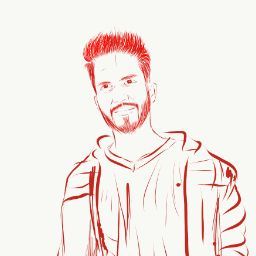 Thasleem P C
over 2 years ago Ziaullah Ebrahimi
over 2 years ago