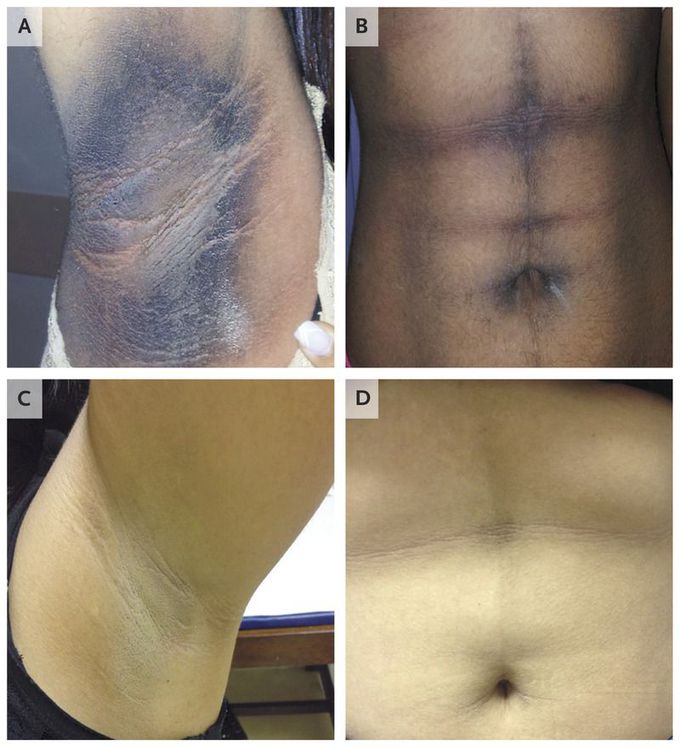 A 27-year-old woman presented with a 2-year history of acanthosis nigricans (Panels A and B), hirsutism, and amenorrhea. Laboratory tests revealed elevated levels of insulin (>200 μU per milliliter [1389 pmol per liter]) (normal range, 2 to 13 μU per milliliter [14 to 90 pmol per liter]) and testosterone (649 ng per deciliter [22.5 nmol per liter]) (normal range, 9 to 63 ng per deciliter [0.3 to 2.2 nmol per liter]), the presence of thyroperoxidase antibodies, and an antinuclear antibody titer of 1:64 (normal titer, <1:32). Blood glucose and glycated hemoglobin levels were normal, and screening for cancer was negative. On follow-up at 6 months, the patient had weight loss and hyperglycemia (fasting glucose level, 174 mg per deciliter [9.7 mmol per liter], and glycated hemoglobin level, 11.2%) (normal ranges, 60 to 100 mg per deciliter [3.3 to 5.6 mmol per liter] and 4 to 6%, respectively). C-peptide levels were elevated at 7.3 ng per milliliter (normal range, 1.1 to 5.0), but tests for anti–glutamic acid decarboxylase, anti–tyrosine phosphatase-related insulinoma-associated–2 (IA-2), and anti-insulin antibodies were negative. The administration of metformin was initiated, and 6 months later hypoglycemic episodes developed. Titers of anti-insulin–receptor antibodies were elevated (1:1280), and type B insulin resistance syndrome was diagnosed. Treatment with prednisone and azathioprine was initiated, and after 6 weeks there was normalization of blood glucose, testosterone, and insulin levels and clinical improvement of acanthosis nigricans (Panels C and D). Acanthosis nigricans can be caused by endocrine, metabolic, genetic, and paraneoplastic conditions. Type B insulin resistance syndrome is an autoimmune disorder characterized by the production of antibodies against the insulin receptor, which leads to disorders in glucose metabolism (from hyperglycemia to hypoglycemia), extreme insulin resistance, acanthosis nigricans, and hyperandrogenism. 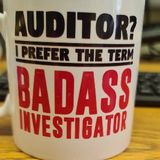 Liz Farquhar
over 1 year ago

Did anyone do an ultrasound of the patient's ovaries? Could this be due to polycystic ovarian syndrome?