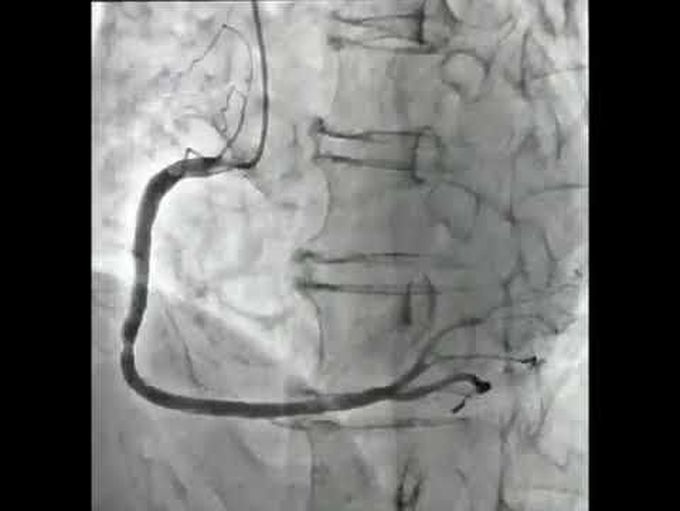 A 52-year-old man who had a history of 34 pack-years of smoking presented to our primary care clinic with a 1-month history of episodic chest pain. The episodes occurred once every night while the patient was at rest, lasted for 15 minutes, and resolved without intervention. Sublingual nitroglycerin was administered, which led to resolution of the pain. Findings from a troponin I test, electrocardiography, and echocardiography were normal. Cardiac catheterization was performed, and the findings showed mild nonobstructive coronary stenosis in both the right coronary artery (Panel A and Video 1) and the left coronary artery. Injection of acetylcholine into the right coronary artery provoked a vasospasm that led to total occlusion of the proximal right coronary artery (the dashed lines in Panel B outline the area in which the contrast agent shown in Panel A was absent; see also Video 2); the vasospasm resolved in 2 minutes. During the spasm, the patient reported chest pain, and electrocardiography revealed ST-segment elevations in the inferior leads and reciprocal ST-segment depressions in the anterior leads (Fig. S1 in the Supplementary Appendix). A diagnosis of coronary-artery vasospasm (formerly called Prinzmetal angina) was made. Coronary-artery vasospasm is characterized by episodes of nitrate-responsive angina during periods of rest, transient ischemic electrocardiographic changes, and angiographic evidence of coronary-artery spasm induced by vasoconstrictors, such as acetylcholine. Oral nifedipine was prescribed, and the patient was advised to quit smoking. At follow-up 2 years later, the patient reported adherence to the medication and to the advice to quit smoking and reported no further episodes of chest pain. 0Reply
Other commentsSign in to post comments. Don't have an account? Sign up now!
1…1
1
Related posts
CrepitusAnyone interest for PLAB?A 75-year-old woman complains about the lack of movement in her hands. Neurological examination reveals atrophy of the muscles of the upper extremities. Fibrillar and fascicular twitching of the shoulder girdle muscles. Muscle tone is lowered in the upper extremities. Tendon reflexes from the upper extremities are reduced. Muscle strength in the extremities is 3 points. The movements of the legs are not disturbed. What is the name of the described clinical syndrome?Structure of the SpermThe Human SpineAnatomy of KidneyLocal anesthesiaAnatomy of earLayers of the ScalpLower leg arteries