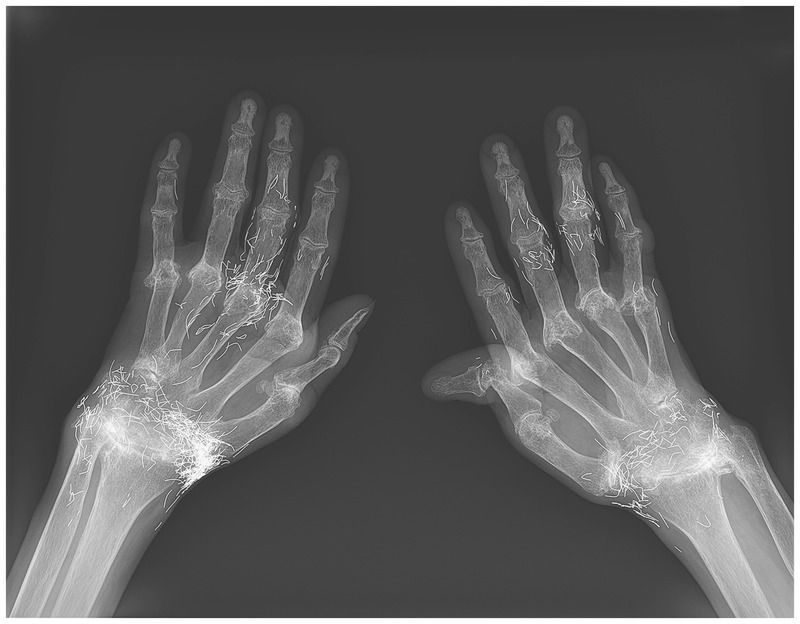 A 58-year-old woman presented to the rheumatology clinic with long-standing joint pain and deformities of both hands and feet. Her joint symptoms had begun when she was approximately 18 years of age, after which she had received treatment with ibuprofen and gold thread acupuncture (the insertion of small pieces of sterile gold thread with the use of acupuncture needles). Ten years before the current presentation, she had received a diagnosis of rheumatoid arthritis, which had been confirmed by laboratory test results that showed a rheumatoid factor of 628.7 IU per milliliter (normal value, <14) and an anticitrullinated protein antibody level of 170.8 U per milliliter (normal value, <5). Plain radiographs of both hands that were obtained at the current presentation showed severe joint damage and deformity of the wrists and proximal interphalangeal and metacarpophalangeal joints, with numerous short gold threads surrounding the joints. In East Asia and globally, acupuncture — including gold thread acupuncture — has long been used to treat joint pain. Oral and injectable gold preparations are also sometimes used. After the initial diagnosis of rheumatoid arthritis, the patient had been treated with the combination of methotrexate and leflunomide. When she was referred to our hospital, we changed her treatment regimen to a combination of methotrexate and abatacept, and she underwent surgery for the foot deformities, which led to a substantial reduction in joint pain.