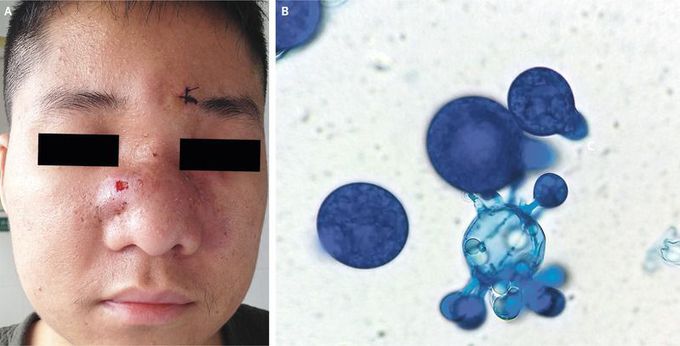 An immunocompetent 22-year-old man from southern China presented to the dermatology clinic with a 3-month history of progressive nasal and maxillofacial swelling. He reported that during the past 3 years he had had episodes of facial swelling for which he had received multiple treatments, including glucocorticoids and antibiotics. The physical examination revealed erythema, edema, and tenderness over the nasal dorsum and forehead, extending to the soft tissue around both eyes (Panel A), that correlated with soft-tissue thickening on computed tomography. Biopsy specimens were obtained from multiple sites, including the forehead and the nose. Histopathological examination of a specimen from inside the nose revealed granulomatous inflammation and fungal elements surrounded by eosinophilic material. A fungal culture grew Conidiobolus coronatus (Panel B), the identity of which was confirmed by polymerase-chain-reaction assay. Rhinofacial entomophthoromycosis was diagnosed. Conidiobolomycosis, a type of entomophthoromycosis, is a rare subcutaneous mycosis that can occur in immunocompetent persons in tropical and subtropical regions. It affects the upper respiratory mucosa and adjacent subcutaneous tissues. Infection probably results from the inhalation of fungal pathogens or from trauma. The patient received itraconazole, trimethoprim–sulfamethoxazole, and a 10% potassium iodide solution for 6 months, and the symptoms had fully resolved without relapse after 1 year of follow-up.

MedstudentMedicalMbbsMedlifeImmunology
17
Other commentsSign in to post comments. Don't have an account? Sign up now!
Related posts
Amputation at work placeBuy Cheap Percocet Online OvernightWhat is adeferent between cardiac arrest and heart attack?A 34-year-old Moroccan man with Fitzpatrick skin type IV presented to the sexually transmitted diseases centre with multiple painless nodules involving the scrotum. The first lesions had appeared when he was 15 years old and had increased progressively in number and size. The patient was concerned about cosmesis and discomfort; however, the condition had not interfered with sexual relations or fertility. His medical history was unremarkable. There was no history of trauma, ulcers or infections of the genital area, and the patient denied any other skin diseases. He worked as a manual labourer. On clinical examination almost the entire scrotal wall was seen to be covered by multiple, firm, hard, subcutaneous nodules with sparing of the median raphe skin. The largest nodule was about 20 mm in size. Laboratory investigations showed serum calcium, phosphate, and parathyroid hormone levels to be within the normal range. Ultrasonography of the testicles did not reveal any abnormalities.Xray Best view for sinuses!!Brown sequard syndromeTreatment for ataxiaAbdominal AortaEclipse PRP treatmentswhat is the diagnosis for this newborn baby?