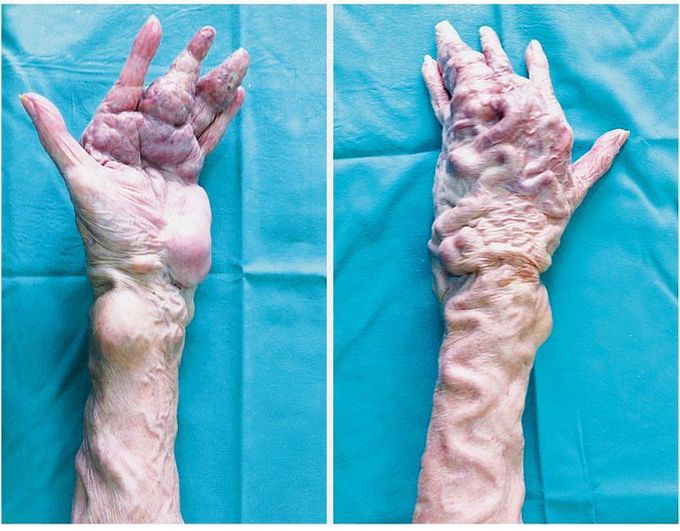 Case of a patient suffering from Parkes Weber syndrome!! This 77-year-old woman was referred for evaluation of fingertip ulcers. She had arteriovenous malformation of the left arm that had been present since childhood. Physical examination revealed hypertrophy, with a giant arteriovenous malformation involving her fingers, forearm, elbow, and upper arm. The malformation was pulsatile, with dilated veins and arteries, and a palpable thrill. Parkes Weber syndrome is characterized by vascular abnormalities known as capillary malformations and arteriovenous fistulas (AVFs), which are present from birth. The capillary malformations increase blood flow near the surface of the skin. They usually look like large, flat, pink stains on the skin, and because of their color are sometimes called "port-wine stains." In people withÂ Parkes Weber syndrome, capillary malformations occur together with multiple micro-AVFs, which are tiny abnormal connections between arteries and veins that affect blood circulation. These AVFs can be associated with life-threatening complications including abnormal bleeding and heart failure. Photo by @nejm

Sensitive
42
Other commentsSign in to post comments. Don't have an account? Sign up now!
Related posts
EczemaViral sinusitis‌
ECG mind mapingDrrezahasanzadCardiacRemoval of an Iris implant!Drreza hsnzdSensitive teethHello there! I am a producer for a major TV network. We are launching a new medical series about tumors, growths and cysts. I would love to connect with anyone who is struggling who cannot afford treatment as our production will cover treatment for most, if not all conditions of this nature. Please email help@aberrantcreative.com