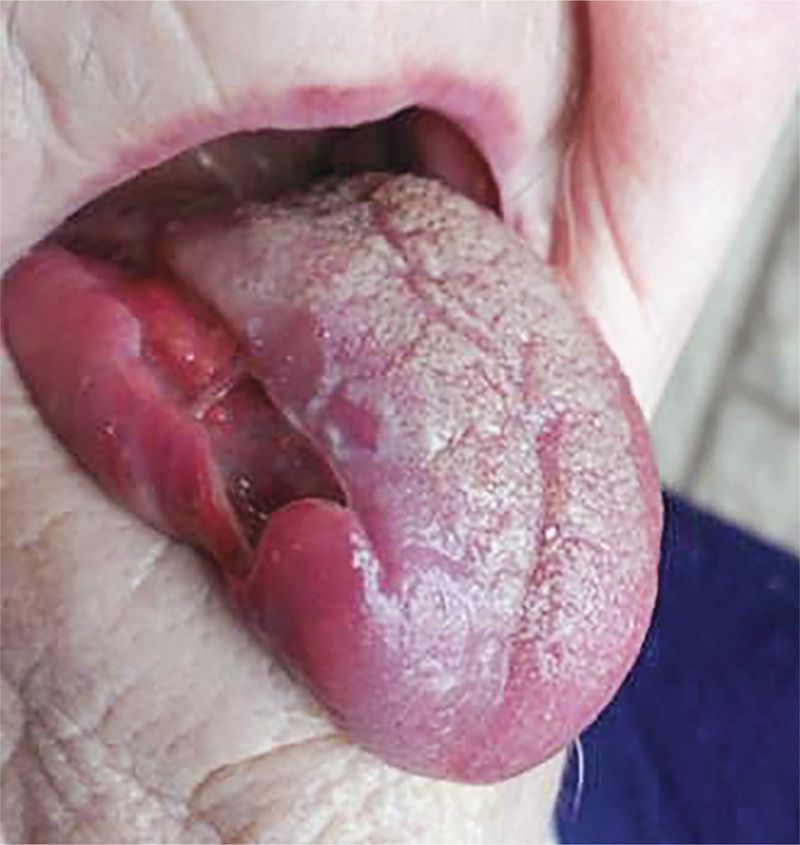 An 86-year-old woman presented to the primary care clinic with a 15-day history of fatigue, headache, and difficulty swallowing. Her baseline medication regimen included daily aspirin. Physical examination was notable for palpable and pulsatile temporal arteries on both sides. There was no fever or scalp tenderness, and the results of ophthalmologic examination were normal. Laboratory studies revealed a white-cell count of 14,950 per cubic millimeter (reference range, 4500 to 11,000) and an erythrocyte sedimentation rate of 120 mm per hour (reference range, 1 to 12). A diagnosis of giant-cell arteritis was considered to be likely. Biopsies of both temporal arteries were performed, and treatment with glucocorticoids was initiated before the results of pathological analysis were available. The biopsy results confirmed the diagnosis of giant-cell arteritis. Eight days after her initial presentation, the patient presented to the emergency department with tongue pain. A necrotic ulceration was observed on the right side of the tongue. Cervicofacial computed tomography, performed after the administration of contrast material, revealed complete thrombosis of the right lingual artery. Tongue necrosis is a rare complication of giant-cell arteritis. With continued treatment with glucocorticoids, her initial symptoms resolved within 2 weeks after her initial presentation, and the tongue lesion healed within 4 weeks. Glucocorticoids were slowly tapered.