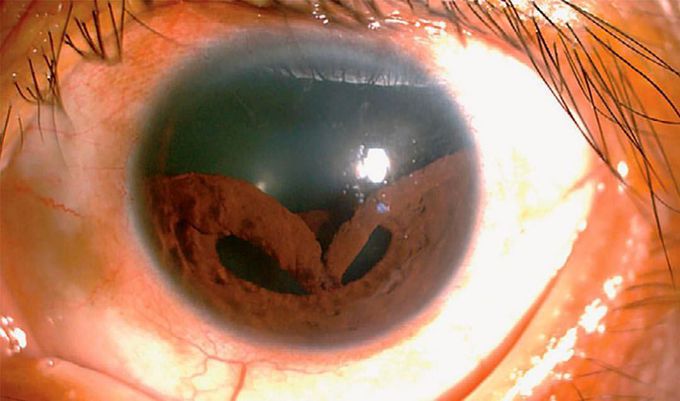 A patient arrived at the ophthalmology clinic in Taiwan with a uniquely deformed iris!! In general, the eye's single opening, the pupil is an aperture through which light travels to reach the retina, a thin layer of tissue lining the back wall of the eye. The retina's photoreceptor cells convert light into signals sent to the back of the brain, where the visual cortex assembles the information and decides what is being seen. For an entire week, the 48-year-old man had pain in his left eye as well as blurred double vision. A brief physical examination revealed left eyelid bruising and an artfully, if painfully, distorted left pupil. The left eye revealed an iris with the upper portion sagging downward, detached from the 9 o'clock position to the 3 o'clock position. This in turn caused separation of the iris with multiple pupils, leading to monocular double vision, blurry vision or photophobia. So what caused the rare injury? A rubber bungee cord that the man used to strap goods onto a motorcycle had struck him directly in the eye. This damage is known as traumatic iridodialysis. The separation of the iris from the band of muscles that sits behind it easily accounted for the patient's blurred and double vision. To repair the damage, the Taiwanese patient underwent surgery that restored the pupil shape and improved his vision.

Anthony
about 3 years ago