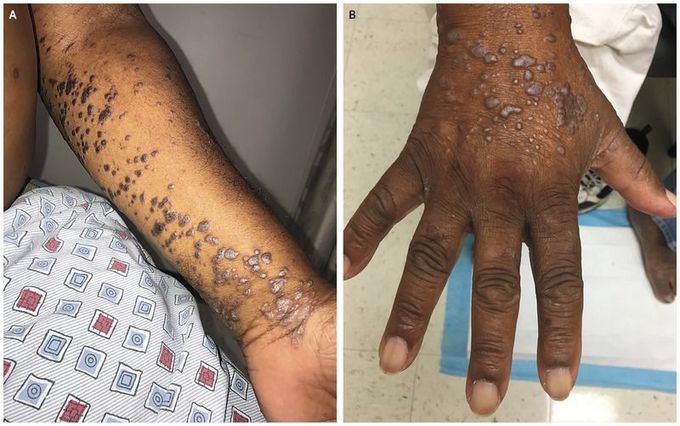 A 69-year-old man presented to the dermatology clinic with a 2-month history of a pruritic rash. The rash had first appeared on his right wrist and within 2 weeks had spread to his arms, legs, and trunk. His medical history was notable for chronic hepatitis C virus (HCV) infection, for which he had completed a 12-week course of elbasvir and grazoprevir 3 months before the onset of the rash. On examination, numerous purple papules were noted on the anterior surface of the forearms (Panel A) and the dorsal surface of the hands (Panel B) as well as on the trunk and legs. Several lesions showed a fine reticulate pattern of dots and lines, called Wickham’s striae. Biopsy of a lesion revealed hyperkeratosis, wedge-shaped hypergranulosis, sawtooth rete pegs, and bandlike lymphocytic inflammation — findings confirming the diagnosis of lichen planus. Although the cause of lichen planus has not been established definitively, it is thought to be an autoimmune disease. Lichen planus has a known association with HCV infection. In this patient, the association between HCV infection, which had been treated, and the later eruption was unclear. Topical or intralesional glucocorticoids may be used in primary treatment, with ultraviolet light therapy and oral immunosuppressive agents reserved for more extensive cases. This patient was treated with topical clobetasol and narrow-band ultraviolet B therapy, and a reduction in lesions occurred within 1 month after the start of treatment.