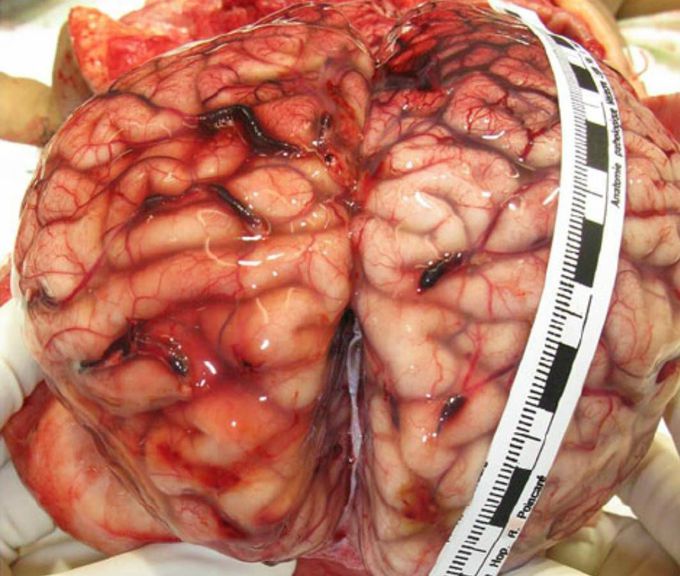 Few paediatric diagnoses generate as much controversy as abusive head trauma, also known as shaken baby syndrome. .Major signs such as multifocal subdural haematomas, cerebral injury, retinal haemorrhage and skeletal fractures are exhaustively described in myriad radiological reports, and are the result of extremely violent trauma. While bruises have significant diagnostic value, they may be missed when located in hidden areas like behind the ears and in the axilla. In some cases, subdural haematomas appear to be isolated, with no other apparent signs, making diagnosis difficult. We would like to stress the need for careful vertex screening to look for bridging vein thrombosis, which — as some pathologists have pointed out — has high diagnostic value. The bridging veins are draining veins that arise from the coalescence of the superficial cortical venous network at the midline, within the subarachnoid space. These veins constitute a short, non-tortuous, perpendicular pipeline between the arachnoid and the dura, making them particularly vulnerable to rupture during anteroposterior movements of the brain within the cranium. In the absence of a clotting disorder, such ruptures lead to thrombosis within a few hours. However, standard autopsy procedures may damage the bridging veins and thereby the demonstration of their rupture and/or thrombosis is often difficult.

Parents or people in general that shake babies need to go straight to the pen. Lifetime of jail. No reason whatsoever would ever be suffice for this. None, zero. Zilch