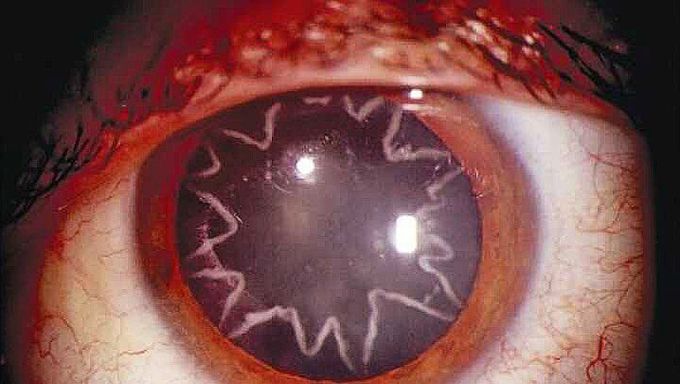 Star-shaped cataract after an electrical shock!

This 42-year old electrician developed a star-shaped cataracts in his eyes after a serious work-related accident caused electricity to run through his body. During a workplace accident the man was slammed with 14,000 volts in his left shoulder, and an electric current passed through his entire body, including the optic nerve, the nerve that transmits visual information from the retina to the visual cortex in the occipital lobe of the brain. Four weeks later, suffering from reduced vision, he went to his doctor who found he had developed this star-shaped cataracts, known as a stellate cataract. Cataracts are cloudiness that accumulates in the lens of the eye. The opaque lens typically loses its ability to properly focus light onto the back of the eye on the retina, which decreases vision.This type of cataract is not uniformly cloudy, and white fractal patterns typically serve as a boundary, as seen in the photograph. There is no definite explanation as for why the cataracts took on star shapes.Normally, cataract surgery would have been enough to restore his eyesight, but he sustained a bit of damage to his retina and optic nerve, resulting in permanent blindness.