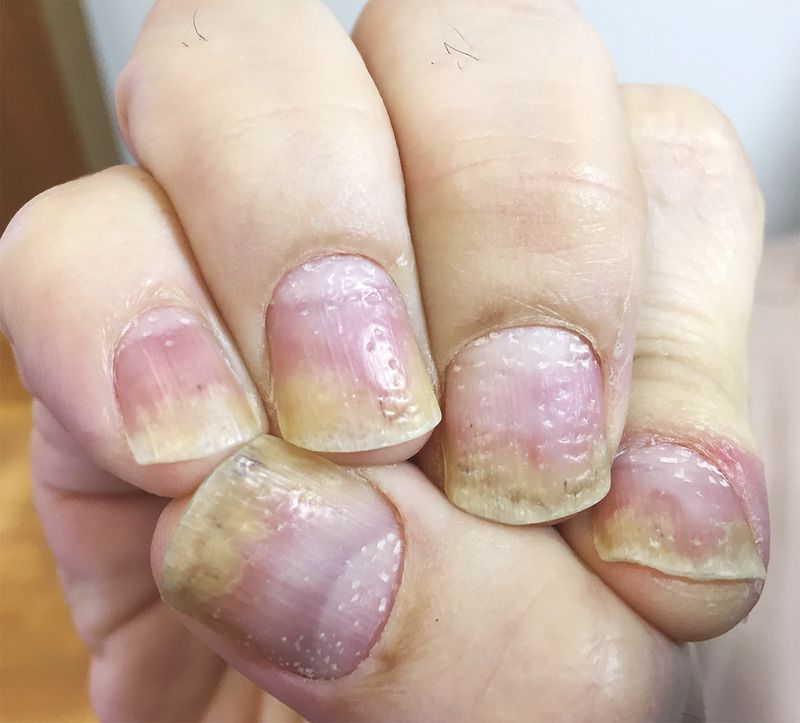 A 28-year-old man presented to the dermatology clinic with fingernail changes that had developed over a period of 3 years. Examination revealed multiple small depressions (pits) in the surface of the nails on both hands, with yellow discoloration of the distal nail. Scaly, erythematous plaques were also present on the extensor surfaces of both elbows and both knees. The patient had no joint tenderness, swelling, or stiffness. A clinical diagnosis of psoriasis was made. Nail changes are common in patients with psoriasis. Signs of psoriasis in the nails include discoloration (e.g., areas of yellow or pink discoloration known as oil-drop discoloration or salmon patches), onycholysis, subungual hyperkeratosis, nail plate crumbling, and splinter hemorrhages. Other conditions in which nail pitting can be seen include alopecia areata, eczematous dermatitis, and traumatic occupational injury. Isolated pits can develop in normal nails. In this patient, a high-potency glucocorticoid in nail lacquer was initiated, and cutaneous psoriasis was treated with a combination topical vitamin D analogue and a glucocorticoid. At follow-up 6 months after the initiation of treatment, the patient’s nail pitting and skin plaques had abated and joint involvement had not developed.