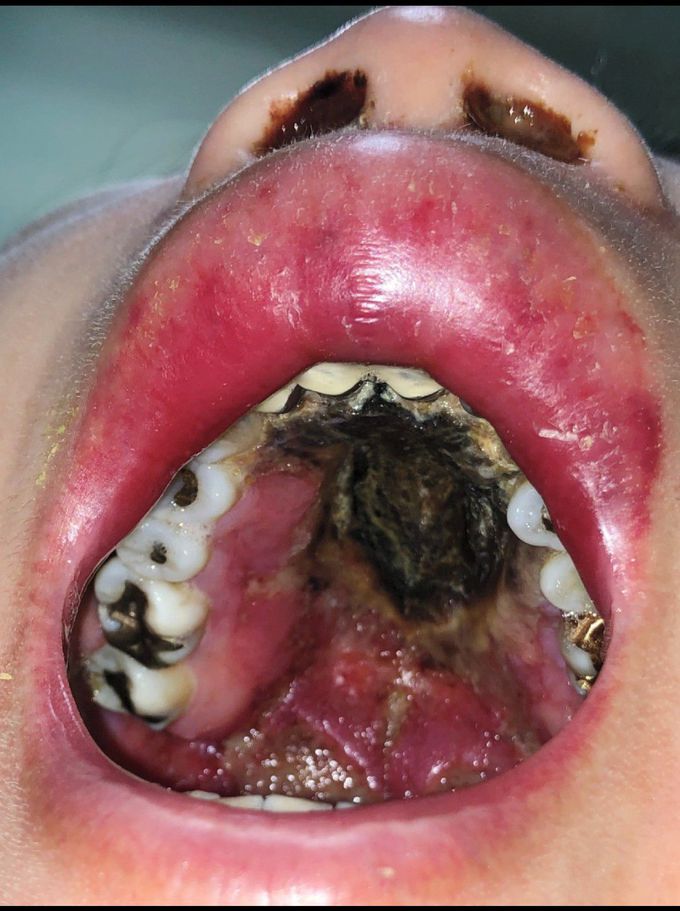 A 50-year-old woman presented to the dermatology clinic with a painless ulcer on her palate and a swollen lip, which were associated with intermittent fevers and general malaise. She had a 3-year history of nasal obstruction with purulent discharge, for which she had received treatment with intranasal glucocorticoids and antibiotic agents. Physical examination revealed a large ulcer with a necrotic base extending over the soft and hard palates. Surrounding erosions covered with fibrinoid exudate were noted, in addition to a swollen upper lip and discolored nasal discharge. The results of laboratory studies showed a white-cell count of 2200 per cubic millimeter (reference range, 4500 to 11,000), a hemoglobin level of 10.7 g per deciliter (reference range, 12 to 15), a platelet count of 65,000 per cubic milliliter (reference range, 150,000 to 400,000), and a ferritin level of 18,745 ng per milliliter (reference range, 12 to 263). Histopathological analysis of a biopsy specimen showed lymphoid proliferation with positive staining for CD3, CD56, and granzyme B, and Epstein–Barr virus was detected on in situ hybridization. A diagnosis of extranodal natural killer T-cell lymphoma, nasal type, was made. A bone marrow biopsy revealed evidence of hemophagocytosis, which is associated with this disease. Chemotherapy was initiated; however, the patient died 1 month later.

At one point in the disease process, would their outcomes have been better and more manageable?