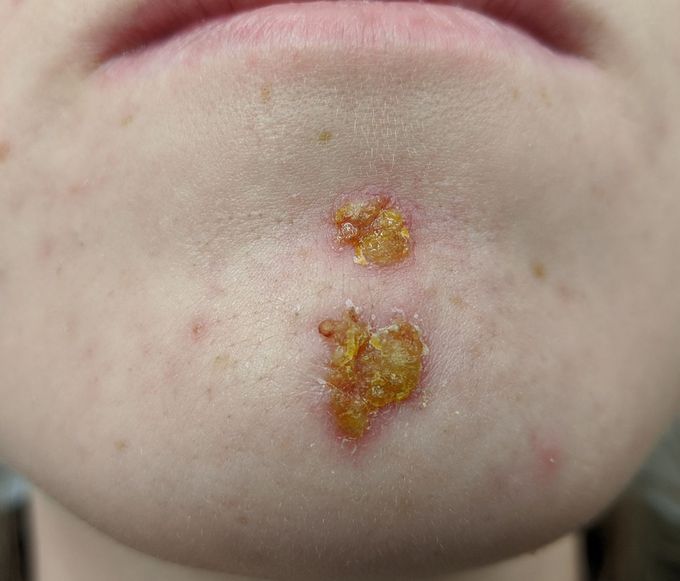 Types and symptoms of impetigo

There are two types of impetigo: non-bullous impetigo – the most common type bullous impetigo The symptoms of both types are described below. Non-bullous impetigo The symptoms of non-bullous impetigo begin with the appearance of red sores – usually around the nose and mouth but other areas of the face and the limbs can also be affected. The sores quickly burst leaving behind thick, golden crusts typically around 2cm across. The appearance of these crusts is sometimes likened to cornflakes stuck to the skin. After the crusts dry, they leave a red mark that usually fades without scarring. The time it takes for the redness to disappear can vary between a few days and a few weeks. The sores aren't painful, but they may be itchy. It's important not to touch or scratch the sores because this can spread the infection to other parts of the body, and to other people. Other symptoms, such as a high temperature (fever) and swollen glands, are rare but can occur in more severe cases. Bullous impetigo The symptoms of bullous impetigo begin with the appearance of fluid-filled blisters (bullae) which usually occur on the central part of the body between the waist and neck, or on the arms and legs. The blisters are usually about 1-2cm across. The blisters may quickly spread, before bursting after several days to leave a yellow crust that usually heals without leaving any scarring. The blisters may be painful and the area of skin surrounding them may be itchy. As with non-bullous impetigo, it's important not to touch or scratch the affected areas of the skin. Symptoms of fever and swollen glands are more common in cases of bullous impetigo.