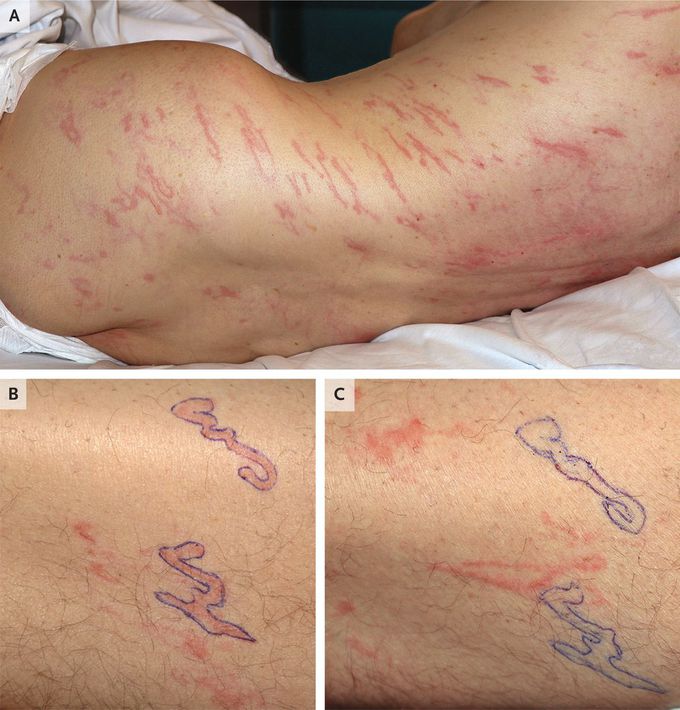 A 64-year-old man with metastatic lung adenocarcinoma had an itchy rash and mild diarrhea develop while he was hospitalized for malignant spinal cord compression. He had started high-dose glucocorticoid therapy 4 days before the symptoms began. Over the previous 3 years, he had had intermittent peripheral eosinophilia of unknown cause, with a maximal absolute eosinophil count of 2300 per microliter (reference value, <500). He worked in sewage management and had lived his whole life in an urban region of Spain. Raised, erythematous, serpiginous tracts were seen on examination of the skin (Panel A); the lesions had originated in the perianal area and spread rapidly to the trunk and limbs. The lesions were outlined with a pen (Panel B); on reevaluation 24 hours later, they were found to have migrated away from their original locations (Panel C). Rhabditiform and filariform larvae of the species Strongyloides stercoralis were seen on stool examination. A diagnosis of strongyloides hyperinfection syndrome with larva currens was made. Larva currens is a shifting serpiginous or urticarial rash caused by the subcutaneous migration of filariform larvae during part of their life cycle, which is accelerated in strongyloides hyperinfection syndrome. After treatment with oral ivermectin, the patient’s rash and diarrhea abated. Mario Puerta-Peña, M.D. Alba Calleja Algarra, M.D. Hospital Universitario 12 de Octubre, Madrid, Spain