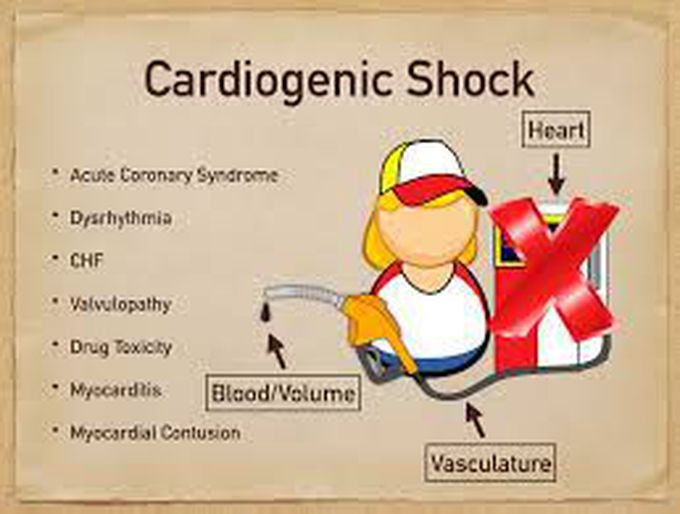 Treatment Cardiogenic shock treatment focuses on reducing the damage from lack of oxygen to your heart muscle and other organs. Emergency life support Most people who have cardiogenic shock need extra oxygen. If necessary, you'll be connected to a breathing machine (ventilator). You'll receive medications and fluid through an IV line in your arm. Medications Fluids and plasma are given through an IV. Medications to treat cardiogenic shock are given to increase your heart's pumping ability and reduce the risk of blood clots. Vasopressors. These medications are used to treat low blood pressure. They include dopamine, epinephrine (Adrenaline, Auvi-Q), norepinephrine (Levophed) and others. Inotropic agents. These medications, which help improve the pumping function of the heart, may be given until other treatments start to work. They include dobutamine, dopamine and milrinone. Aspirin. Aspirin is usually given immediately to reduce blood clotting and keep blood moving through a narrowed artery. Take an aspirin yourself while waiting for help to arrive only if your doctor has previously told you to do so for symptoms of a heart attack. Antiplatelet medication. Emergency room doctors might give you drugs similar to aspirin to help prevent new clots from forming. These medications include clopidogrel (Plavix), tirofiban (Aggrastat) and eptifibatide (Integrilin). Other blood-thinning medications. You'll likely be given other medications, such as heparin, to make your blood less likely to form clots. IV or injectable heparin usually is given during the first few days after a heart attack.