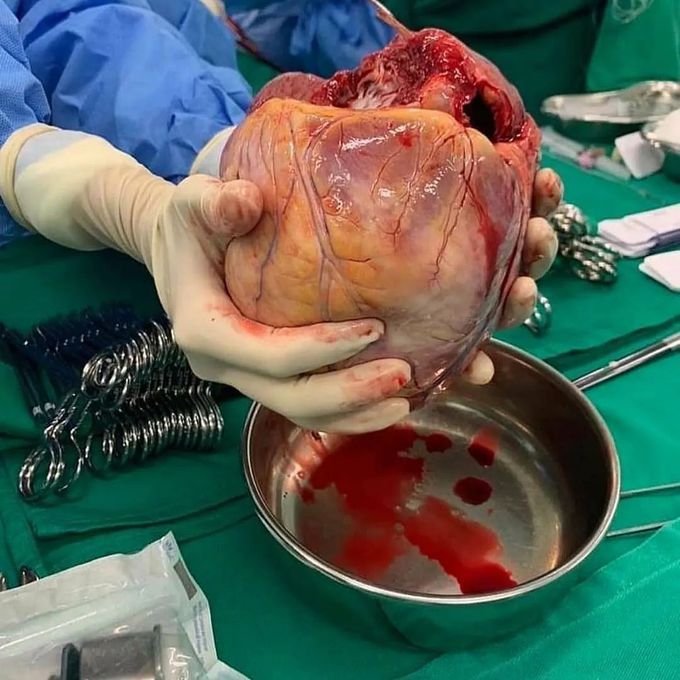 This enormous heart is double the size of a normal human heart. Cardiomyopathy is a progressive disease of the myocardium, or heart muscle. A contemporary definition for cardiomyopathy is a myocardial disorder in which the heart muscle is structurally and functionally abnormal in the absence of coronary artery disease, hypertension, valvular disease, and congenital heart disease sufficient to explain the observed myocardial abnormality. Let’s go through the different types of big (abnormally big) hearts. Dilated cardiomyopathy (DCM) is characterized by dilation and impaired contraction of one or both ventricles. In DCM, the decreased ventricular contractility of the dilated left ventricle (LV) leads to failure of the left and eventually right heart with decreased ventricular output. The dilation often becomes severe and is invariably accompanied by an increase in total cardiac mass (hypertrophy). Affected patients have impaired systolic function and clinical presentation is usually with features of heart failure. Hypertrophic cardiomyopathy is a clinically heterogeneous disorder caused by a variety of mutations associated with hypertrophy of the LV, and occasionally of the right ventricle. Subsequently it causes decreased ventricular relaxation and defective diastolic filling and systolic output. A variant of hypertrophic cardiomyopathy is Athlete's heart. In response to intensive endurance training, there can be physiologic increases in LV wall thickness, cavity size and mass, often referred to as "athlete's heart." Intensive athletic training has also been associated with a number of arrhythmias, also usually benign. Restrictive cardiomyopathy is caused by the proliferation of connective tissue, with subsequent atrial enlargement (but normal ventricles). It is characterized by nondilated ventricles with impaired ventricular filling and decreased elasticity of cardiac tissue. Hypertrophy is typically absent, although infiltrative disease (such as amyloidosis) and storage disease (such as Fabry disease) may cause an increase in LV wall thickness. Systolic function usually remains normal, at least early in the disease.