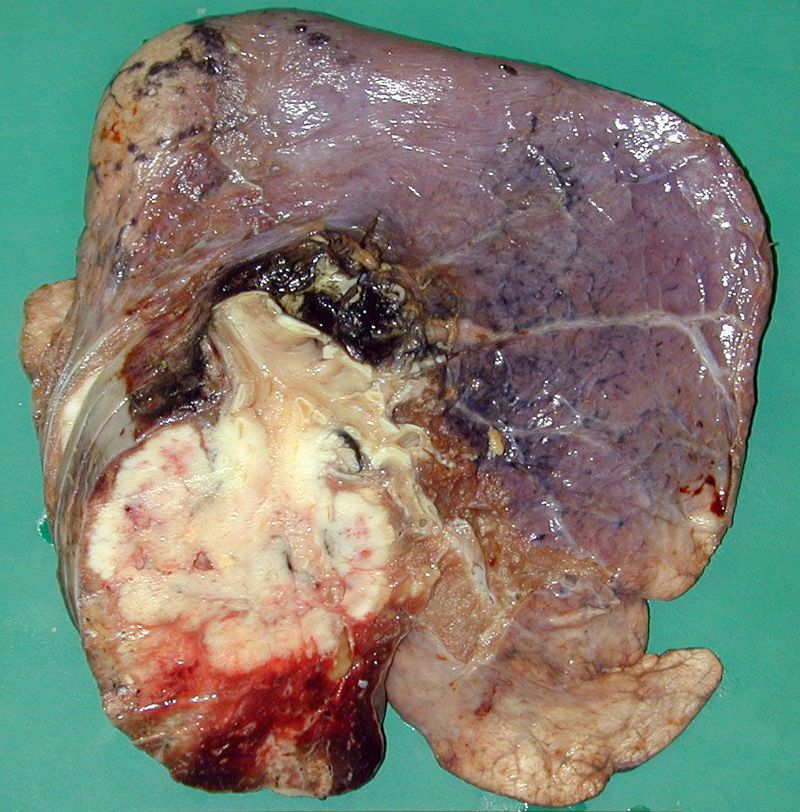 When cancer originates in the lungs, it’s called lung cancer. There are two main kinds of lung cancer: small cell lung cancer (SCLC) and non-small cell lung cancer (NSCLC). NSCLC is the most common kind of lung cancer, comprising 80 to 85 percent of lung cancer diagnoses. It doesn’t grow as quickly as small cell lung cancer. There are three main kinds of NSCLCs: adenocarcinomas squamous cell carcinomas large cell carcinoma Symptoms of NSCLC In its early stages, NSCLC usually doesn’t cause any symptoms. When symptoms start to develop, they can include: persistent cough fatigue chest pain unintentional and unexplained weight loss breathing problems joint or bone pains weakness coughing up blood If the cancer spreads to other areas of the body, it can cause additional or worsened symptoms, such as: difficulty breathing problems with speech pain in areas where cancer cells have spread, such as in bones, head, back, or abdomen increased weakness or fatigue seizures Sometimes there are no discernible symptoms, at least initially. An imaging test used for other purposes may reveal the diagnosis. What causes NSCLC? A number of factors can increase your risk for developing lung cancer. Smoking cigarettes or being exposed to secondhand smoke is a primary risk factor for the disease. Exposure to asbestos and certain paints or chemicals may also increase your risk. While you may not be able to completely prevent NSCLC, there are steps you can take to reduce your risk of developing the disease. If you smoke cigarettes, you should develop a plan to quit. How is NSCLC diagnosed? Along with a physical exam and medical history, a variety of tests can help your doctor diagnose lung cancer. Tests your doctor may order include: bone scan imaging tests like MRI, CT scan, and PET scan of the chest microscopic examination of sputum (phlegm) to check for cancer cells biopsy of the lung (a piece of lung tissue is removed for testing) Once the diagnosis of cancer has been confirmed, the cancer will be staged. Staging is the way doctors classify the cancer according to its spread in the body. NSCLC has five stages, from stage 0 to stage 4, from weakest to strongest severity. Treatment of NSCLC Treatment for NSCLC can vary, based on the stage of disease, your health, and other factors. Talk with your doctor about the best treatment option for you and the possible side effects. Different modes of treatment may be combined to yield the best results. There are five main ways to treat non-small cell lung cancer, including: Surgery Surgery can be used in the early stages of NSCLC. Depending on the location of the cancer, one of the following procedures may be necessary: lobectomy (removal of a lobe) wedge resection (removal of the tumor and some surrounding tissue) segmentectomy (removal of a portion of the lung) pneumonectomy (removal of the entire lung) Treatments before or after may also accompany the surgery. These could include: chemotherapy targeted therapy immunotherapy Radiation therapy Radiation therapy uses high-energy rays to kill cancer cells and prevent new ones from growing. A regimen would be created consisting of a number of treatments over the course of a few days to a few weeks. Radiation wouldn’t be used to treat cancer that has spread throughout the body, but it can be useful in targeting specific areas and small tumors. It may also be an option when surgery isn’t. Chemotherapy Chemotherapy is a type of systemic therapy that uses anticancer drugs to kill cancer cells. They can be given intravenously or in pill form. Like with radiation, a regimen would be created with a number of cycles over a period of time. Chemotherapy drugs would be chosen based on the type of cancer and may be combined with other chemotherapy drugs. Chemotherapy can improve the outlook for all stages of lung cancer. Targeted therapy Targeted therapies address specific proteins, genes, or the environment that enables cancer growth. They can address issues such as cells with generic mutations or stopping angiogenesis (the process of making new blood vessels). New targeted therapies are being developed every day and are helping people live longer and better with lung cancer. Speak with your doctor to see if any targeted therapies are right for you. Immunotherapy Immunotherapy, or biologic therapy, aims to use your body’s immune system to fight cancer cell growth. This type of therapy is often recommended for later-stage cancer or when other therapies aren’t the preferred treatment. Combined therapies including immunotherapy are often used to achieve better results.