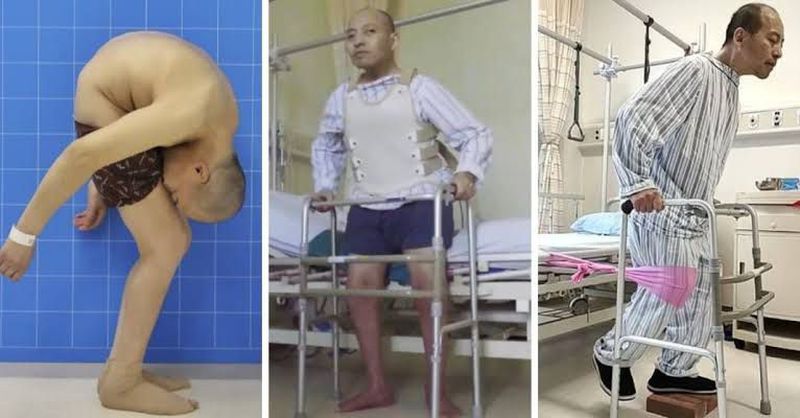 The folded man stands up after 28 years!

A 48 years old man, Li Hua from China, also called 'Folding Man' , was able to stand straight for the first time in 28 years after a successful surgery at Shenzhen University General Hospital. Li Hua was diagnosed with Ankylosing Spondylitis at the age of 18.Due to severe spinal deformity three parts of his body were ‘connected’ – his chin to his chest, his sternum to his pubic bone, and his face to his femur. Li Hua's condition worsened in the past five years.Due to high risk to his life, he was refused surgery multiple times until his family met Professor Tao Huiren, the head of the spinal surgery and orthopaedics department at Shenzhen University General Hospital. Professor Huiren had operated on several other 'folding' patients but he had never come across a case as severe as Li Hua's. His approch was to break and rebuilt Li Hua's entire spine in a series of four operations this year. "Our only option was to break his bones one section at a time - femur, cervical vertebrae, thoracic vertebrae, lumbar vertebrae - and then straighten his entire spinal column. The risks involved were 20 to 30 times that of a regular spinal surgery patient, and the chances of him becoming a paraplegic were also very high," he said. The surgeries were huge success and Li's entire body has now opened up.After 28 years Li Hua was finally able to stand straight and even lie flat. He has even started to move with the help of a walker. Reported by: https://www.google.com/amp/s/www.timesnownews.com/amp/the-buzz/article/man-folded-in-half-since-1991-stands-straight-after-four-successful-surgeries/528213 Image via: https://images.app.goo.gl/VMZ6r6Gpr4TwdmEL8