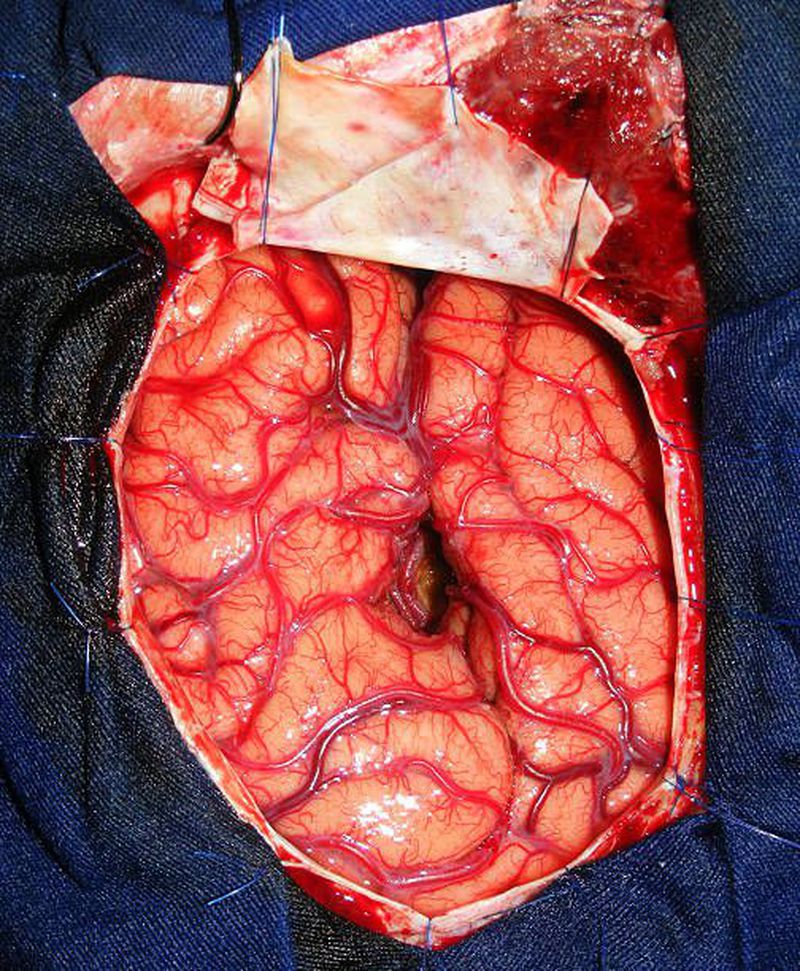 A craniotomy is the surgical removal of part of the bone from the skull to expose the brain. Specialized tools are used to remove the section of bone called the bone flap. The bone flap is temporarily removed, then replaced after the brain surgery has been done. Some craniotomy procedures may use the guidance of computers and imaging (magnetic resonance imaging [MRI] or computerized tomography [CT] scans) to reach the precise location within the brain that is to be treated. This technique requires the use of a frame placed onto the skull or a frameless system using superficially placed markers or landmarks on the scalp. When either of these imaging procedures is used along with the craniotomy procedure, it is called stereotactic craniotomy. Scans made of the brain, in conjunction with these computers and localizing frames, provide a three-dimensional image, for example, of a tumor within the brain. It is useful in making the distinction between tumor tissue and healthy tissue and reaching the precise location of the abnormal tissue. Other uses include stereotactic biopsy of the brain (a needle is guided into an abnormal area so that a piece of tissue may be removed for exam under a microscope), stereotactic aspiration (removal of fluid from abscesses, hematomas, or cysts), and stereotactic radiosurgery (such as gamma knife radiosurgery). An endoscopic craniotomy is another type of craniotomy that involves the insertion of a lighted scope with a camera into the brain through a small incision in the skull. Aneurysm clipping is another surgical procedure which may require a craniotomy. A cerebral aneurysm (also called an intracranial aneurysm or brain aneurysm) is a bulging weakened area in the wall of an artery in the brain, resulting in an abnormal widening or ballooning. Because of the weakened area in the artery wall, there is a risk for rupture (bursting) of the aneurysm. Placement of a metal clip across the "neck" of the aneurysm isolates the aneurysm from the rest of the circulatory system by blocking blood flow, thereby preventing rupture.