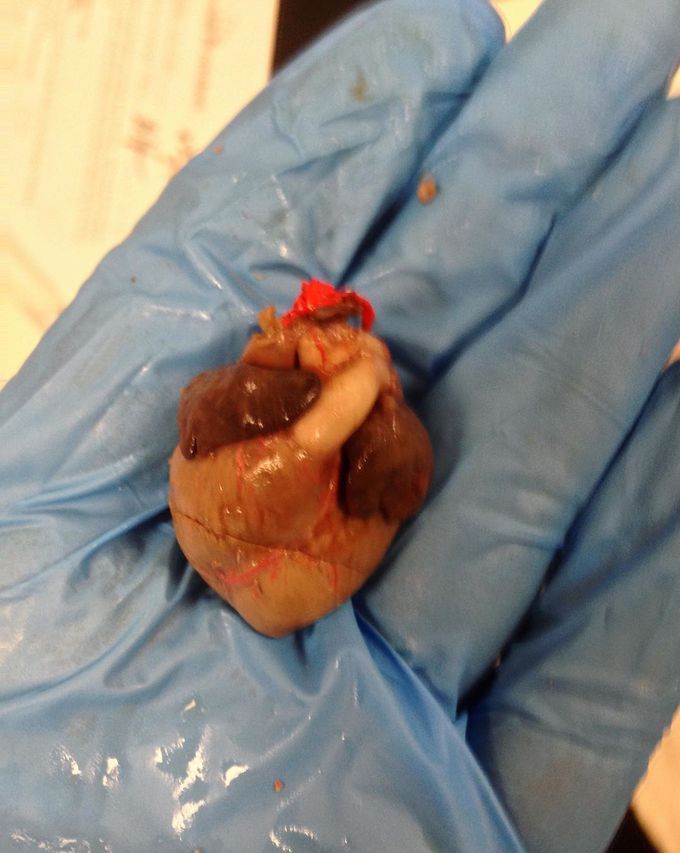 Fetal pig heart being held by hand in blue latex glove!! The incredibly tiny, delicate fetal heart. How can such a small heart pump enough blood to support life? Interestingly enough, the fetal heart does not have to pump blood to the lungs to pick up oxygen. It does not need a separate pulmonary artery and aorta. In the fetal heart, these two blood vessels are connected by a blood vessel called the ductus arteriosus. After birth, the ductus closes and a separate left pulmonary artery and aorta form. The fetal heart also has an opening between the upper chambers (the right and left atria) called the foramen ovale. It lets blood flow directly from the right atrium to the left atrium during fetal development, but closes after birth. So the ductus arteriosus and the foramen ovale are part of the fetal circulatory system before birth but disappear soon after birth. In most babies, these blood-flow routes naturally close up shortly after birth, when the baby's lungs and cardiovascular system take over. Because the fetal heart has a circulatory system different from the one the baby uses after birth, it may be days or weeks before some congenital heart defects are found. How many weeks old do you think this fetus was at this point of heart development ?

Sensitive
32
Other commentsSign in to post comments. Don't have an account? Sign up now!
Related posts
CardiacRemoval of an Iris implant!Drreza hsnzdSensitive teethHello there! I am a producer for a major TV network. We are launching a new medical series about tumors, growths and cysts. I would love to connect with anyone who is struggling who cannot afford treatment as our production will cover treatment for most, if not all conditions of this nature. Please email help@aberrantcreative.comHow is HIV Passed from one person to another?Microneedling.JERGENS® Natural Glow®GAME TIMESpinal Cord Injury