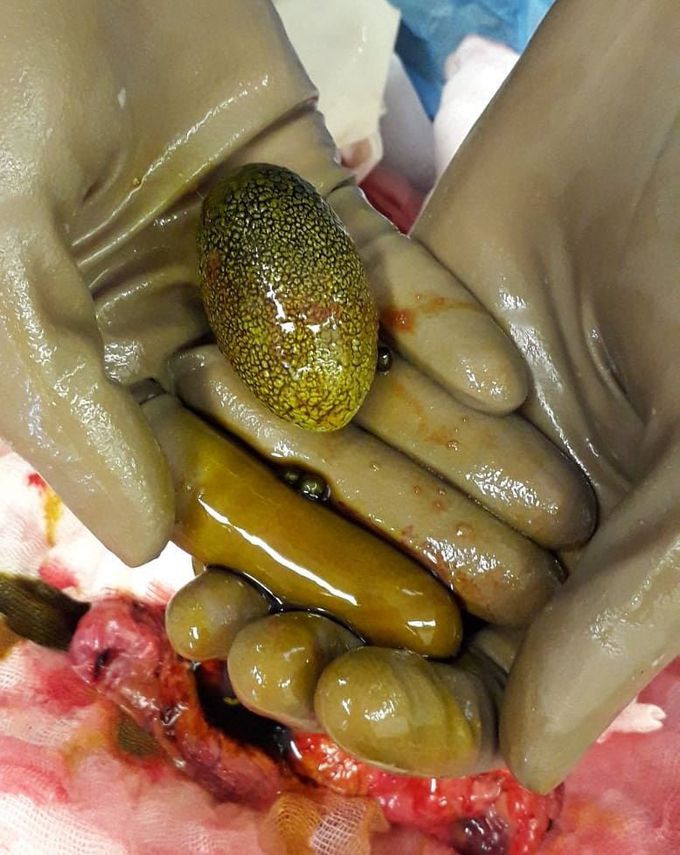 Removal of a fascinating gallblader stone! What does it resemble? 🥚 Your gallbladder is a small, pear-shaped organ on the right side of your abdomen, just beneath your liver. The gallbladder holds a digestive fluid called bile that's released into your small intestine. Gallstones are hardened deposits of digestive fluid that can form in your gallbladder. Gallstones range in size from as small as a grain of sand to as large as a golf ball. Some people develop just one gallstone, while others develop many gallstones at the same time. Types of gallstones that can form in the gallbladder include: -Cholesterol gallstones. The most common type of gallstone, called a cholesterol gallstone, often appears yellow in color. These gallstones are composed mainly of undissolved cholesterol, but may contain other components. -Pigment gallstones. These dark brown or black stones form when your bile contains too much bilirubin. People who experience symptoms from their gallstones usually require gallbladder removal surgery. Gallstones that don't cause any signs and symptoms typically don't need treatment.

Habib Cissé
about 2 years ago

0Reply
Other commentsSign in to post comments. Don't have an account? Sign up now!
Related posts
EczemaViral sinusitis‌
ECG mind mapingDrrezahasanzadCardiacRemoval of an Iris implant!Drreza hsnzdSensitive teethHello there! I am a producer for a major TV network. We are launching a new medical series about tumors, growths and cysts. I would love to connect with anyone who is struggling who cannot afford treatment as our production will cover treatment for most, if not all conditions of this nature. Please email help@aberrantcreative.com