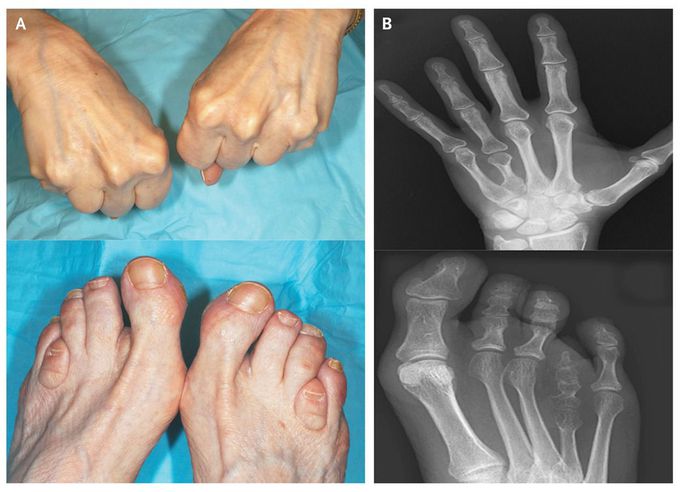 A 71-year-old woman presented to the clinic for management of hypertension. On physical examination, she was found to have an absence of the fourth knuckle on each hand and brachymetatarsia of the fourth toes (Panel A). She had no cognitive deficits or dysmorphic features. Serum measurements of calcium, phosphorus, and parathyroid hormone were normal. Radiography of the hands and feet showed fourth metacarpal and metatarsal shortening along with osteodystrophic features (Panel B), a condition that was diagnosed as Albright's hereditary osteodystrophy. First described in 1952 by Fuller Albright, the disorder is caused by a paternally transmitted mutation in the gene encoding adenylate cyclase-stimulating G alpha protein (GNAS1), which results in the characteristic osteodystrophy with a normal renal response to parathyroid hormone and preserved calcium homeostasis (called pseudopseudohypoparathyroidism). Maternal transmission of the same gene creates a different phenotype, in which the same anatomical abnormalities are seen but there is resistance to parathyroid hormone with hypocalcemia, hyperphosphatemia, and high serum levels of parathyroid hormone (called pseudohypoparathyroidism). Patients with pseudopseudohypoparathyroidism usually do not need specific treatment or further follow-up. Veera Babu
over 2 years ago