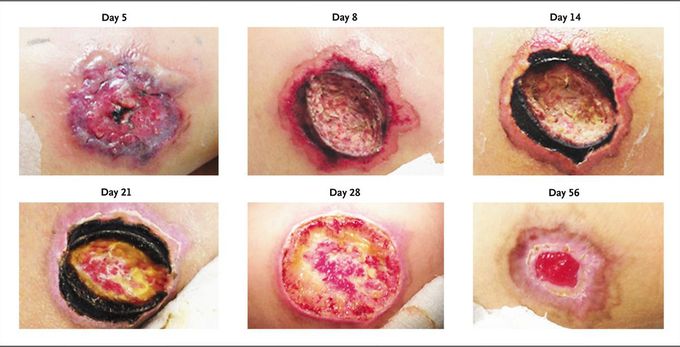 A 10-year-old healthy girl from a rural area in Northeast Mexico was bitten on the right posterior lateral thigh by a spider that had characteristics matching those of a brown recluse spider (Loxosceles reclusa). Five days later, a necrotic lesion with a diameter of 6.1 cm and perilesional edema developed in the area of the bite, accompanied by fever. The patient was treated with clindamycin, ceftazidime, acetaminophen, and ketorolac tromethamine. On day 8, débridement of the necrotic area was performed, with resolution of the fever and edema 12 hours later. On day 14, the patient was pain-free and was discharged; there was a necrotic border on the area of débridement. By day 21, the lesion was healing slowly and the necrotic border was unchanged. On day 28, a second débridement was performed because of the slow regeneration of tissue. By day 56, the wound was painless and almost healed, with initiation of scar formation.