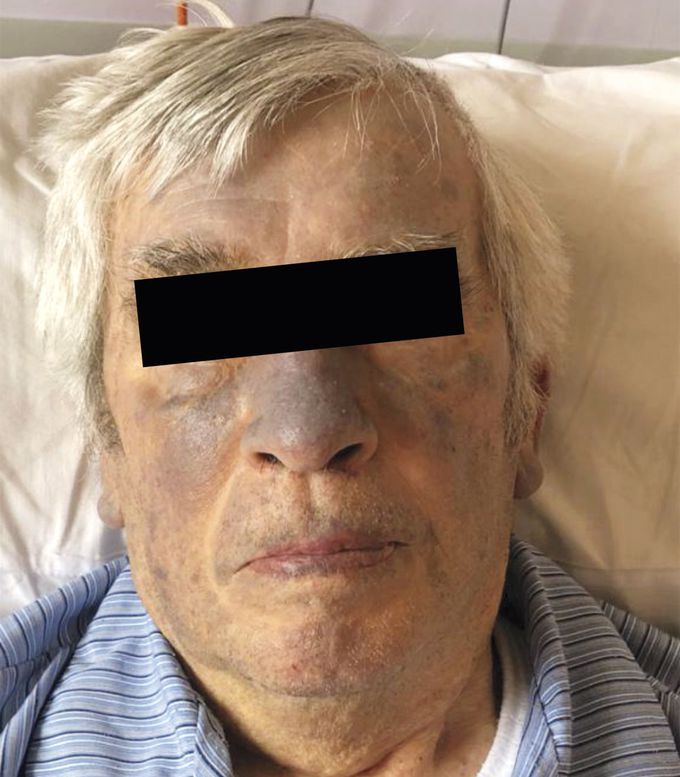 An 81-year-old man with a history of atrial fibrillation and hypertension presented to the emergency department after a fall. His medications were apixaban, ramipril, bisoprolol, amlodipine, and amiodarone. Physical examination revealed blue and gray pigmentation, sometimes referred to as ceruloderma, with discoloration of his nose, cheeks, and forehead and sparing of the deep skin folds. He had no injuries from the fall and reported that this discoloration had been long-standing. An electrocardiogram showed atrial fibrillation with a heart rate of 68 beats per minute. Treatment with amiodarone had been initiated 15 years earlier for an episode of atrial fibrillation with rapid ventricular response. Skin discoloration is an uncommon adverse effect of amiodarone and may abate with cessation of the drug. The fall was attributed to orthostatic hypotension. During the hospitalization, adjustments to the patient’s medications were made, including discontinuation of amiodarone. At a 6-month follow-up visit, the skin discoloration persisted. The patient reported no further falls or any further episodes of atrial fibrillation with rapid ventricular response. Yuosef Sleman
over 2 years ago Kashi Khan
over 2 years ago

Great case study. If no pulmonary toxicity or liver issues, he did quite well on that drug for such a prolonged period.