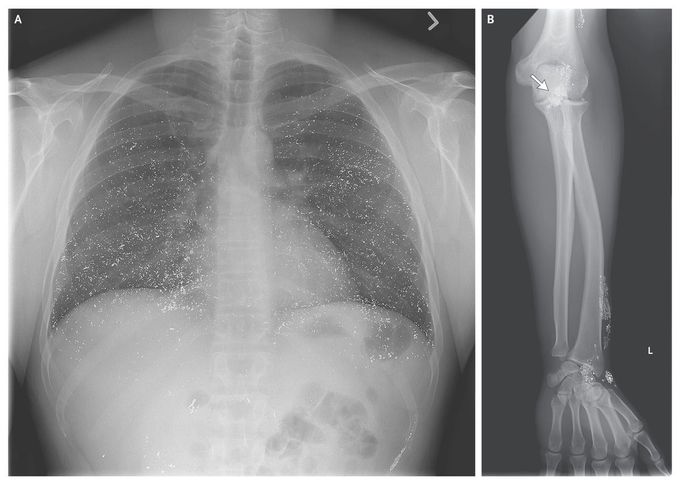 A 40-year-old man presented with headache, dry cough, and dyspnea that had begun 3 days earlier. Physical examination revealed labile mood, intention tremor, and tender subcutaneous nodules on the left forearm. The oxygen saturation was 92% while he was breathing 2 liters of oxygen per minute through a nasal cannula. A chest radiograph (Panel A) revealed innumerable small, high-density opacities diffusely distributed throughout both lungs. Laboratory testing revealed a urine mercury level of 1249 μg per liter (reference range, 0 to 10) and a serum mercury level of more than 160 μg per liter (798 nmol per liter; reference range, 0 to 10 μg per liter [0 to 50 nmol per liter]). The patient reported cutaneous exposure to mercury while exploring his recently deceased father's old gun box; liquid mercury is sometimes used to clean lead from gun barrels and chambers. A radiograph of the left forearm and wrist showed metallic opacities in the soft tissues that corresponded to the subcutaneous nodules found on examination and followed the course of superficial veins (Panel B, arrow). The clinical picture was consistent with self-injection of mercury both intravenously and subcutaneously. The patient was treated with chelation therapy with sodium 2,3-dimercapto-1-propanesulphonic acid (DMPS). By hospital day 5, the tremor had resolved, and he was less emotionally labile. On repeat testing, the urine mercury level was 692 μg per liter. Psychiatric consultation was obtained, and the patient was transferred to an inpatient psychiatric unit.