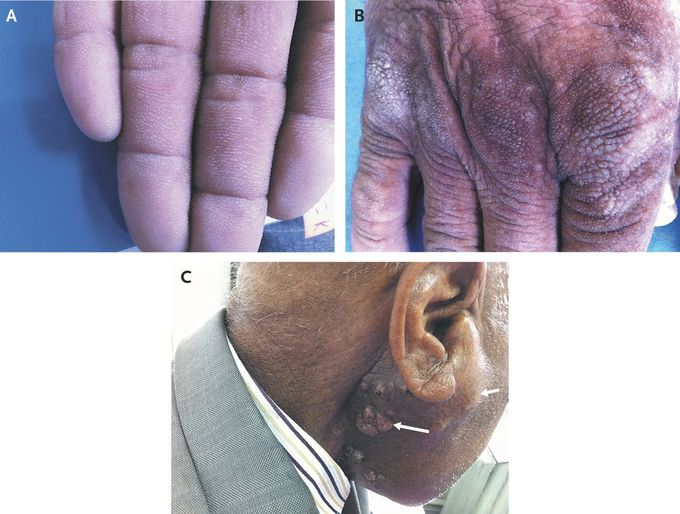 A 67-year-old man presented with a 2-month history of widespread thickening of his skin and a 2-week history of multiple cutaneous nodules in the right infraauricular region. He had a history of squamous-cell carcinoma of the tongue base. Examination of the palmar side of his hands revealed velvety, thickened ridges resembling tripe (Panel A). Hyperpigmentation and accentuation of skin markings were noted at multiple locations, including the joints of his hands (Panel B), suggesting acanthosis nigricans. A 4-cm subcutaneous nodule (Panel C, short arrow) and approximately 10 skin-colored papules (Panel C, long arrow) were noted in the right preauricular and infraauricular regions, respectively. Biopsy of the palmar skin revealed acanthosis palmaris, and biopsy of the skin-colored papules revealed cutaneous metastases of squamous-cell carcinoma. Acanthosis palmaris (also known as tripe palms or acquired pachydermatoglyphia) is typically manifested as velvety, diffuse palmar hyperkeratosis and accentuated dermatoglyphic patterns and is usually associated with cancer, most often gastric or lung cancer. Because the patient was under an oncologist's care and declined topical treatment, we did not start additional therapy.