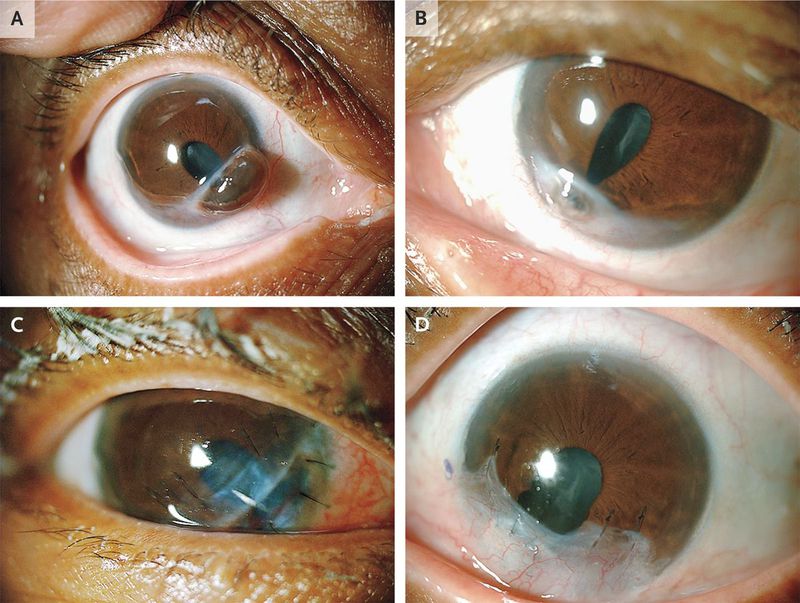 A 61-year-old woman with long-standing rheumatoid arthritis presented with the sensation that she had a foreign body in her right eye; she reported no symptoms in her left eye. The patient had systemic symptoms associated with her rheumatoid arthritis, with no synovitis, and was receiving treatment with naproxen. Evaluation revealed corneal perforations in both eyes, with iris prolapse, resulting in irregular pupils. She also had cataracts, probably long-standing, since she was unperturbed by her visual acuity — 20/400 in the right eye and 20/200 in the left eye (Panels A and B, respectively). Notably, the conjunctivas were uninjected. The erythrocyte sedimentation rate was 110 mm per hour. Oral steroids were started before the initiation of methotrexate, and corneal-patch grafting was performed. The anatomical integrity of both eyes was preserved, albeit with persistent defects in the iris (Panel C, right eye after surgical repair; Panel D, left eye after surgical repair), but acuity was limited to 20/150 in the right eye and 20/100 in the left eye owing to progressive cataracts. Cataract surgery was deferred until these issues were resolved. Corneal perforations are a surgical emergency. Progression may be prevented by the administration of immunosuppressive treatment directed at the underlying rheumatoid arthritis.