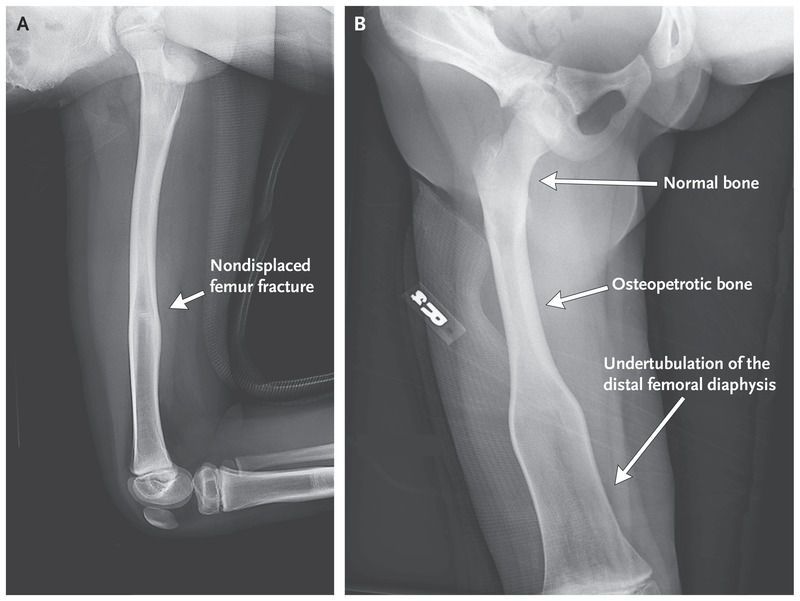 An 8-year-old boy presented with new-onset acute pain in his right leg. Radiographs showed a nondisplaced fracture (Panel A) and undertubulation of the distal femoral diaphysis — a condition known as Erlenmeyer-flask deformity (Panel B). He had a history of neuroblastoma, which was diagnosed when he was 6 months of age; the disease progressed after standard chemotherapy but had been in remission for the 5 years before this presentation, after treatment with cyclophosphamide and monthly intravenous bisphosphonate therapy. Bisphosphonate therapy was discontinued after 18 months because of concern about osteopetrosis on routine radiographic imaging. Laboratory testing, imaging, and genetic testing did not reveal any hereditary or other common causes of acquired bone disease, including primary bone marrow disorders, heavy-metal poisoning, bone metabolic diseases, and other dysplasias. The delineation between osteopetrotic and normal bone (Panel B) suggested a period of increased bone turnover followed by improved bone growth. This finding is more consistent with bisphosphonate exposure than with an underlying genetic condition. The patient remains at risk for fractures in transition areas between osteopetrotic and normal bone. It was recommended that he avoid contact sports and continue annual follow-up; 18 months later, he has had no new symptoms or fractures.