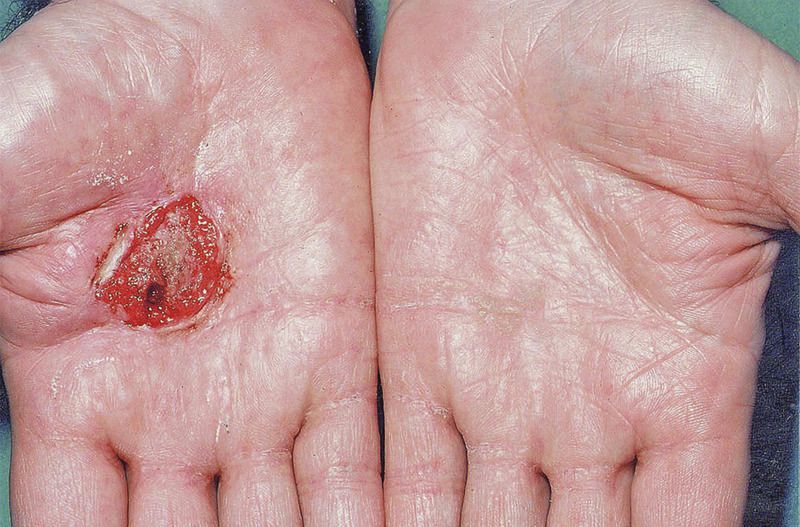 A 56-year-old man presented to the dermatology clinic with an ulcerated lesion on the palm of his right hand. Approximately 40 years earlier, he had been treated with radiation therapy for palmar hyperhidrosis of both hands. The patient had received a total dose of 25.6 Gy of radiation to both palms. Thirty-eight years after the radiation treatment, he first noted a nontender plaque on the palm, but he did not present for care until the lesion began to ulcerate, approximately 18 months later. On physical examination, he had an ulcerated lesion measuring 2 cm in diameter on the right palm. He also had red and dry palms on both hands and painless lymphadenopathy in the right bicipital sulcus. Biopsy revealed invasive squamous-cell carcinoma, as well as findings consistent with chronic radiation-induced dermatitis; lymph-node biopsy confirmed the presence of metastatic disease. Radiation-induced squamous-cell carcinoma can appear decades after exposure to ionizing radiation. Radiation therapy is no longer commonly used for the treatment of hyperhidrosis. The patient underwent amputation of his right arm and chemotherapy, but he died 17 months after diagnosis from complications of metastatic disease.