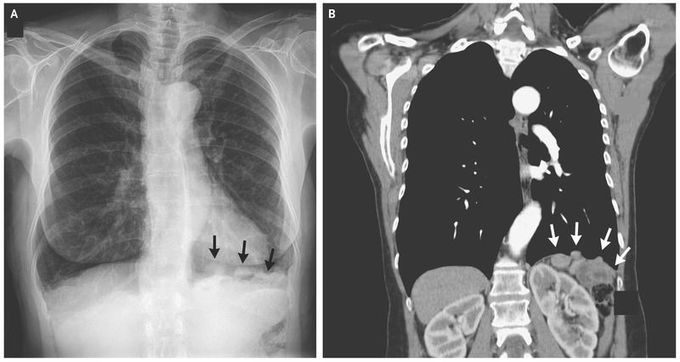 A 62-year-old woman with progressive shortness of breath and a 40-pack-year smoking history was referred for pulmonary evaluation after a radiograph of the chest showed nodularity along the left hemidiaphragm (Panel A, arrows), raising the possibility of cancer. The radiograph was otherwise unremarkable except for hyperinflation suggestive of emphysema and mild thoracic scoliosis. Her medical history was notable for a gunshot wound to the thoracoabdominal region 28 years earlier, which had resulted in injury to the liver, left hemidiaphragm, and spleen, requiring a laparotomy and splenectomy. Computed tomography revealed several small, basilar, pleural nodules on the left side (Panel B, arrows) as well as a diaphragmatic defect and nodules in the splenic bed, with findings of prior splenectomy. A technetium-99m–labeled scan with heat-damaged red cells confirmed the diagnosis of splenosis. This study showed remnants of splenic tissue above and below the left hemidiaphragm, including nodules in the left hemithorax that extended as high as the aortic arch. Splenosis refers to heterotopic viable splenic tissue that is implanted because of spillage or intravascular migration of cells from splenic pulp. This condition usually follows splenic trauma with rupture, accidental damage to the spleen during surgery, or elective splenectomy. The degree of immunocompetence was uncertain, and we recommended that the patient be immunized against encapsulated bacteria. She began using an inhaler for chronic obstructive pulmonary disease, which was confirmed with the use of spirometry and explained her initial symptoms of progressive shortness of breath, and had a good response.

0Reply
Other commentsSign in to post comments. Don't have an account? Sign up now!
Related posts
Hi, what is the difference between head tilt and jaw thrust?Spinal Cord InjuryKartagener's syndromeHegar SignRhabdomyosarcomaHypocalcemiaMPFL Reconstruction Surgery â¢ Easy Explained - OrthoFixar 2022These are some points for understanding Cowden syndrome‌
Buy Ambien Online with credit card At Cheap price In Overnight