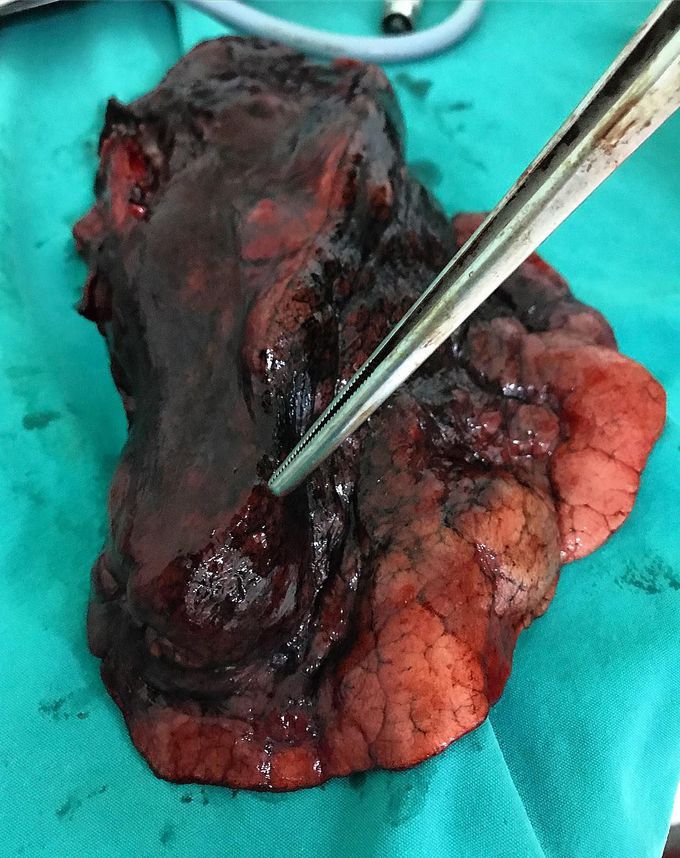 Let’s cover some lung pathology. This is a serious little deadly cancer, but it can be treated with surgery if the cancer remains within the lung parenchyma (without involvement of the opposite lung, pleura, chest wall, or mediastinum). This is by far the most common type of lung cancer and as its name says, it does not have small-cells on histology. Histologically it can be further divided into adenocarcinoma, squamous cell carcinoma, and large cell carcinoma. This is a tricky and insidious cancer, producing no symptoms until the disease is well advanced so early recognition may be life-saving. When symptoms show up, they include cough (often with blood), chest pain, dyspnea, wheezing, hoarseness, weight loss, chronic fatigue and loss of appetite. Surgery, chemotherapy, and radiation are the main treatment options. Surgery includes lobectomy (removing a section of the lung), pneumonectomy (removing the entire lung), or wedge resection (removing part of a lobe), and is reserved for stages I and II. This is because stages III and IV are more progressive with either regional or distal metastasis so chemotherapy is considered superior for advanced cancer. In the treatment of stage I and stage II, radiation therapy alone is considered only when surgical resection is not possible. Radiation is a reasonable option for lung cancer treatment among those who are not candidates for surgery.Photo by @drecho

Sensitive
105
Other commentsSign in to post comments. Don't have an account? Sign up now!
Related posts
EczemaViral sinusitis‌
ECG mind mapingDrrezahasanzadCardiacRemoval of an Iris implant!Drreza hsnzdSensitive teethHello there! I am a producer for a major TV network. We are launching a new medical series about tumors, growths and cysts. I would love to connect with anyone who is struggling who cannot afford treatment as our production will cover treatment for most, if not all conditions of this nature. Please email help@aberrantcreative.com