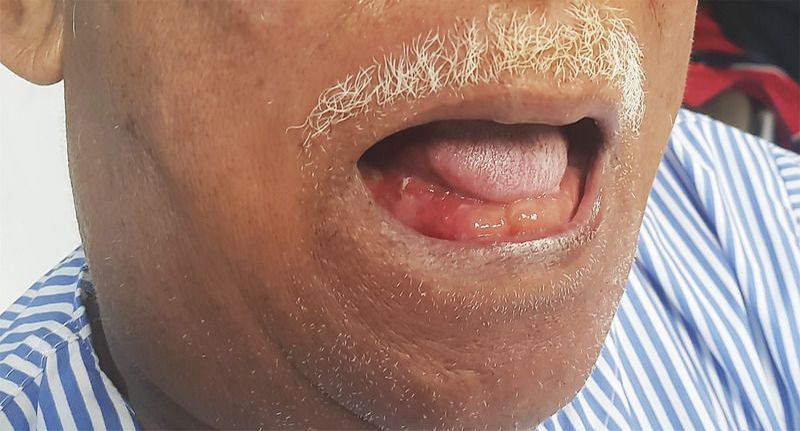 A 68-year-old man presented to the emergency department with a 2-day history of swelling of the neck. One week before presentation, he had a toothache, followed by fever and progressive difficulty and pain with swallowing both solids and liquids. He had no difficulty opening his mouth and had no voice changes or noisy breathing. Examination showed right submandibular and submental swelling with marked edema of the floor of the mouth, resulting in superior displacement of the tongue. Dentition was poor, with multiple dental caries. Flexible nasopharyngolaryngoscopy revealed edema of the valleculae and epiglottis. The airway was not obstructed. The patient received a diagnosis of Ludwig’s angina, an infection of the submandibular space that can rapidly progress and compromise the airway. He was treated with broad-spectrum intravenous antibiotic agents and closely observed for any sign of airway obstruction. Carious teeth were extracted while the patient was under local anesthesia. The patient completed a course of antibiotics, and at 1 month of follow-up, he was well and had no residual symptoms.

medstudentmedicaldoctormbbsmedlife
72
Other commentsSign in to post comments. Don't have an account? Sign up now!
Related posts
A man in China learned this lesson the hard way after finding out that he had a 20-foot-long (6 meters) tapeworm living inside of him— a result of chowing down on uncooked cow meat.Simplified assessment and management of trauma patientsHeartwormsSurgery courseLuxatio CordisAbxdervgttrauma surgeryEMERGENCY MEDICINEPituitary hormonesSeddon Classification of Neurological Injuries