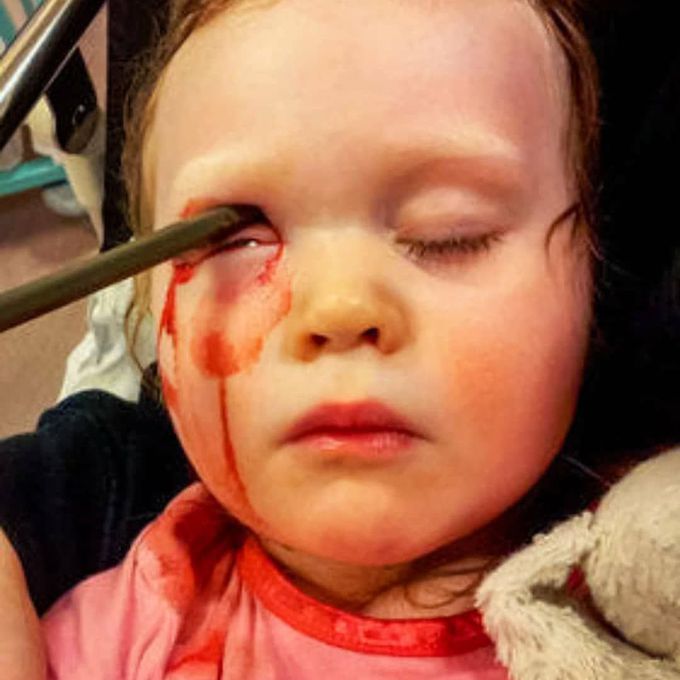 Pencil logged in a 2 year old's brain! Two-year-old Wren Bowell had been drawing in her bedroom and ran outside toward her parents to show her work. On her way, she tripped over the stairgate and the pencil that was in her hand impaled her eye and went into her brain. She was then taken to the hospital with the object still lodged in her eye. It was fortunate that Wren's mother, is a nurse and she didn't consider taking out the pencil. Wren was taken to the hospital where scans revealed her injury is serious. It was decided that she will be transferred to another hospital to see neurosurgeons. It was then revealed that Wren had been very lucky because she was only a millimeter away from permanent brain damage or death. Consultant neurosurgeon Ian Pople explained. Neurosurgeons spent four hours operating on Wren to save her life. Wren had to have a part of her skull removed so doctors can operate. Also, doctors had to use an antibiotic wash to make sure that no pencil flecks remained in the toddler's brain. Wren's skull was then put back together using biodegradable plastic plates and screws. After surgery, Wren spent three weeks in the hospital before she was allowed to go home with family.

I want to share it May i ask you send the caption?! Abdul Muiz
about 3 years ago Kittu
over 3 years ago

What happened to her injurd eye????